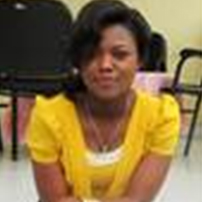 Nyota is a passionate women’s rights activist and has dedicated her life to social justice, conflict transformation and peacebuilding. She is currently the communication manager at La pepiniere a DFID program whose goal is to improve the situation of adolescent girls and young women in the Democratic Republic of Congo. La pepiniere seeks to gather or produce evidence on their realities in Kinshasa and on what works to facilitate their empowerment

Nyota began her social justice work as a translator/interpreter at the World Social Forum in Nairobi, Kenya in 2007. In 2009 she began working with International Emergency and Development Aid (IEDA) in Goma, Democratic Republic of Congo as well as Norwegian Church Aid, supporting the organizations’ peacebuilding work in conflict-ridden eastern Congo. She later returned to Kenya where she worked at FEMNET a pan African-women led Communication and Development network, and at Urgent Action Fund- Africa’s grant making program, which responds to urgent needs of women human right defenders. From 2012-2016 Nyota worked as a Fundraising and Communication Manager at Fonds pour les femmes Congolese (FFC), FFC provides small grants; capacity building to women and girls organizations focusing on women’s political participation, reproductive health rights, sexual and gender-based violence HIV/AIDS as well as building women’s’ movement in DRC from the ground up. .Nyota has a degree in Business Finance and Accounting. She is a bilingual (English/French) translator and a passionate women’s rights and social justice activist.