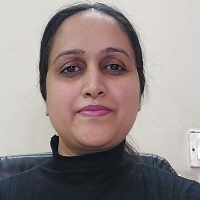 She has done her Law from Campus Law Centre, Delhi University.
In 2016, she was nominated to be the Chairperson of Local Committee under Sexual Harassment of Women at Workplace (Prevention, Prohibition and Redressal),Act, 2013 under the aegis of District Magistrate, New Delhi and since then she is discharging her duties as Chairperson and now it’s her second term as a Chairperson. As Chairperson, she had
investigated several cases of sexual Harassment faced by working women.
In December, 2020, she joined WICCI as Delhi Anti-Sexual Harassment Council’s member and soon decided to head a Council for State of Uttar Pradesh for Women Indian Chamber of Commerce and Industry (WICCI) and launched the Uttar Pradesh Anti-Sexual Harassment Council in March-2021.
Being a working women and observing things around her, made her realized that there are several misconceptions between different genders and little understanding about the professional behavior among the society, which lead to gender imbalance within the workplace.
Sensing that she had launched her firm ‘सshaktaम् Mindz’ under which she and her team impart awareness sessions and trainings on Anti-Sexual Harassment Laws (POSH as well as POCSO Acts) for organisations and provide support in implementing the law by formulating Anti-Sexual Harassment policies for organizations as per their specific requirements and other compliances. It is her mission & vision to spread awareness in public about their rights as well duties towards each other.