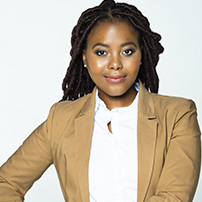 Noma Koranteng is the Co-owner and CEO of Luhlaza Integrated Industries Group which owns the biggest black woman youth owned Pump manufacturing Company in Southern Africa called Scamont Luhlaza Africa.
Luhlaza Group also owns Luhlaza Foundries and Engineering which manufactures casings and foundry consumables and recently the group added Luhlaza Facilities management a business which focuses on soft services (cleaning, landscaping, hygiene, pest control and waste management) and hard services ( HVAC, building maintenance and engineering) . Over the years the company has looked after and fed over 2000 families directly and indirectly through job creation in the communities where the business operates in.
Noma is known as the Queen of steel in the steel and Engineering Industry. She advocates for change, equality and woman representation in companies and Industries at large. She’s a creative thinker, leader and black industrialist in the manufacturing sector. Noma was named by Destiny Magazine top 40 trailblazer woman to watch out for in 2017, Noma is one of the first black Industrialists the country produced in the foundry industry and she was the first black woman to be on the cover of SEIFA Industry magazine during Woman’s month in 2016.
She has a BA degree in Industrial Psychology obtained from Rhodes University, a Bcom Honours Degree in Industrial Psychology obtained from University of South Africa. She’s a young black Industrialist and businesswoman. She sits on various committees at the Black Business Council representing professionals and businesses in efforts to lobby government on policy advocacy in order accelerate the participation of black business in the mainstream economy. She’s a member of the Institute of Directors of Southern Africa which promotes corporate governance practices, enabling and developing director’s skills, safeguarding the integrity and status of directorship as a profession and providing a voice for directors. She is a former member of the Steel and Engineering Industries Federation of Southern Africa (SEIFSA’s) Education and Training advisory committee. She is a former member of the Metal Chamber Committee at Merseta where she advises, monitors and gives input on Skills related matters at the manufacturing SETA in South Africa.
She is one of the founding members of BBC youth Portfolio focused on changing the youth Agenda of South Africa through youth entrepreneurship empowerment, skilling and training and giving funding opportunities to youth owned businesses. She gives back to the community on her personal capacity through doing charity work with Door of Hope, New Jerusalem Children’s Home and Bethany Home which houses 48 abused women.
Her goal is to enter male dominated industries, disrupt the industries and build businesses where woman and their businesses can participate economically and open doors for SMME’s to also participate in these spaces. She is currently one of the young bright minds in South Africa who is the ambassador/Alumni for One Young World on the basis of her capacity for leadership, concern about global issues, ability to generate and articulate impactful ideas, teamwork and evidenced commitment to volunteering or other extracurricular activities She’s passionate about youth entrepreneurship, business collaborations, leadership, education and youth skills development in the engineering and manufacturing industry as she has identified huge skills gap which need urgent attention. She is interested in young African woman who have potential to be leaders in their
companies and businesses. She firmly believes that it is time for women in general to show that they too have a place in different sectors such as manufacturing, engineering foundry, rail, construction industries and her most recent portfolio facilities management. She believes women need to say that we too can be part of the decision making process in corporate South Africa and be counted. She would really like to see corporate and government entities in the country attract a lot of capable and competent woman leaders.