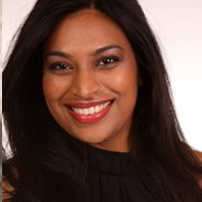 Diversity and self-­‐development have been constant themes in the life of Nirashnee Bhoendie. Culturally, we see this in her Indian-­‐Surinamese-­‐Dutch heritage. Her Indian great-­‐ grandparents sought out new opportunies in Suriname and her Suriname-­‐born parents did the same when they moved to The Netherlands It is here where Nirashnee was born and raised. Influenced by her Dutch environment while maintaining strong ties to her Surinamese and Indian roots.
Professionally, Nirashnee has cultivated a varied CV with Master degrees in both Business law
(Leiden University) and International & European law (VU University Amsterdam). She has worked for multinationals and her family’s real estate company but decided to start her own legal consultancy company in 2014, with which she operates in The Netherlands and Suriname. On an Extracurricular level, Nirashnee also aspired to broaden her knowledge and experience. Via summer school at UC Berkeley she studied the topics of Feminism & Post-­‐Colonialism, at Leiden she provided voluntary legal assistance and in The Hague and Suriname she does non-­‐profit work for a Surinamese diaspora foundation.