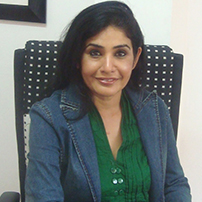 Ms.A.Nina Reddy is a graduate from Usmania University, Hyderabad with a well defined ability & talent to handle people through excellent inter personal skills and disposition.

She has taken up family business as her career. Nina a dynamic, young leader stepped into the management of Savera Hotels, now as Joint Managing Director to create a new dimension to the style of management to take the people along and to redefine the age-old Indian hospitality to make Savera a happening place all the while. It is her ability to combine entrepreneurial abilities with family responsibilities in right proportions which makes her a successful entrepreneur striking a right balance. She is blessed with two daughters who are also equally enterprising – Elder daughter – A Post Graduate @ Cornell University -New York, got married and now she is into family business taking charge of Brew Room operations and expansion & younger daughter did her medicine and she is now a Geriatric specialist.
Mrs. Reddy has a shrewd sense of business and is a go-getter. For the first time in Chennai, she pioneered a health studio called O2, a stand-alone gym, which stands as a proof for her dynamism and enterprising qualities. Today there are 9 branches under the brand!
The Duchess Club with 300 odd members started by her is almost 16 years old & is run enthusiastically by her and by her able team. A person like Nina with her commitment and in-born compassion for community service executes meticulously the plans that she contemplates for the good of the community & could definitely be a person for a bigger cause to benefit many more. She believes in reaching out to people in need and touching as many lives as possible.
National Association for the blind has been doing tremendous work for the visually challenged. Today they have multifarious activities for promotion of blind welfare in the areas of blindness prevention, education, re-habitation, vocational training, employment, community –based re-habitation, service for the elderly blind sports & recreation etc.
Ms.Nina Reddy JT.MD Savera Group of Hotels has taken the responsibility to support the cause and take this service to the next level. She is also the president of the Tamil NADU Branch of NAB, She conducts Blind car rally every year in the month of March
BOB- It’s a force which Ms Nina Reddy has begun as a mainspring. A group of energetic bunch of 125 babes and boys who move on their cycles on everyWednesday and Sunday at the very early hours. Ms Nina stimulates it with her perseverance and setting herself an example for the co cyclists to take it through with full of determination. As she proves her consistency in anything she begins, She has been proving in this force of hers too being a prime mover. They have done more than 175 rides from BOB, recently crossed 102 kms couple of days ago just through cycles which is amazing, and it deserves a big applause
Nina Reddy is a member of various Social organizations, she believes in learning, updating her knowledge and skills. Looking at expanding into organic farming and Eco resorts.