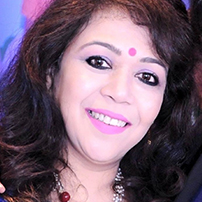 Nilaanjana Jain Chakraborty – An ex hotelier, Jewellery designer, Tarot Card Reader, Numerologist, Social and Peace Activist. A true Calcuttan, who was born into a reputed Jain family later married renowned actor Arjun Chakraborty. Nilaanjana was a student of Modern High School For Girls and graduated with English (Hons) and completed post graduation in Mass Media, Communications and Public Relations. Soon after, she joined Taj Group of hotels and was associated with the hospitality industry for ____ years. Nilaanjana was then blessed with a daughter, Suhasini who is now 22 years old. After the birth of her daughter, she took a maternal hiatus. Her next stint was as a senior corporate communications personnel with an NRI based Placement Agency in Kolkata. Nilaanjana also freelanced as a corporate communications person for various Chambers of Commerce and Management Associations.
Giving shape to her passion, Nilaanjana began designing jewellery for her friends to begin with, dabbled with mixed medium of fibre glass, wood, glass etc…she has successfully conducted exhibitions all over India and retails with prestigious outlets in Chennai, Bangalore to name a few. She also has celebrity clients like Rituparna Sengupta, Debasree Roy and Srilekha Mitra.
Spiritualism and philosophy always fascinated Nilaanjana, which drew her to pursue Tarrot Reading and Numerology professionally almost 18 years back. She is known for recommending the change of color for the Kolkata Knight Riders team jersey from ‘black and gold’ to ‘purple and gold’. She has also been instrumental in making several accurate predictions on politics and sports on prominent television channels like Aaj Tak. She is known for her articles on Times Of India, The Telegraph, Hindustan Times and some of her accurate predictions being the Cricket World Cup 2011, World Cup Football 2011 and IPL predictions.
Nilaanjana is a Social Activist espousing various causes such as domestic violence, rape, child abuse, politics etc and has covered the Nirbhaya rape extensively from Kolkata for Headlines Today. A regular face on India Today, NDTV Eng, NewsX, and Times Now. She is also the recipient of the famous Bharat Nirman Award, the Swayamsiddha Award and the Shakti Award and is idolized by many as an icon of the modern independent woman today.