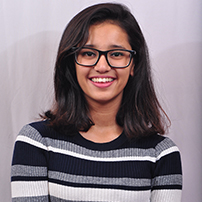 Invented a Salivary Diagnostic Test for Smokers for Early Detection of Oral Cancer All of 16, Nikhiya Shamsher is an innovator and a cancer researcher having invented a home based salivary diagnostic test for chronic smokers to detect the early risk of oral pre-cancer and oral cancer. She has an International Patent Pending on her project titled “A Simple, Non-invasive, Low Cost, Point of Care, Colorimetric Method, using Reactive Oxygen Species induced Lipid Peroxidative changes in Saliva, to assess the Risk of Oral Pre-cancerous Lesions and Oral Squamous Cell Carcinoma in Chronic Smokers”. The diagnostic test has shown
accuracy of 96% and costs a mere Rs. 38 per sample. She obtained the Ethics Approval for her study from the Institutional Ethics Committee and conduceted
her study at the rebowned International Institute of Science (IISC, Bangalore).
For her innovation, Nikhiya won a Gold Medal at INSEF 2018 (Indian Science and Engineering Fair). She was also declared a finalist at Dr. Pradeep Thevannoor Innovation Awards 2018. Nikhiya also won the Grand Award at the IRIS National Fair 2018 and has been selected to represent Team India at Intel International Science & Engineering Fair 2019 at Phoenix, Arizona. She has made a video to simplify the concept on how the salivary diagnostic test would work in real life. You can see more about it on https://youtu.be/IjPWRtSgdUs
Devised a Spacetime grid for better understanding of Einstein’s general Theory of Relativity and warping of spacetime:-
Nikhiya is fascinated about unraveling the secrets of the universe and one of her favorite subjects is Physics. Her video on 4-Dimensional Spacetime and Gravity was declared as the Popular Vote Top Scorer and Finalist in the recent Breakthrough Junior Challenge 2018. She has been fascinated about how gravity can work over large distances between objects that are not connected to each other at all. This is what brought her to Einstein’s General Theory of Relativity and the concept of Spacetime. She did not find the ball-on-a-trampoline analogy satisfactory. This inspired her to attempt a better visual representation of the warping of spacetime and thus she built the Spacetime Grid, over a period of 4-5 months. Umpteen trials of size, shape, materials, motors went into this and the result is seen in her video https://www.youtube.com/watch?v=aXGe9U1FxUw