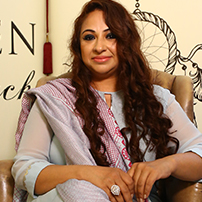 Nidhika Bahl is the International Bestselling Author of the book ‘The Queen Of The Comeback’. She is also an entrepreneur, motivational speaker, strategic interventionist and celebrity life coach. She completed her MS in Finance from Lancaster University, UK, in 1999. After 6 successful years of a corporate career in the United States, Europe and India, she realized that number crunching was not her passion, even though she was brilliant at it. So she left her high-flying corporate career and started her own media company called Parallel Circles Entertainment (PCE) in 2006. As the founder and creative director of PCE, she had the privilege of working with some of the best names in the corporate industry such as P&G, Gillette, Kotak Mahindra Bank, Akzo Nobel, CRY Shiksha, ZOYA by Tata and many more. In 2008, Nidhika was diagnosed with major clinical depression. Even though that heartbreaking news left her feeling completely devastated, she was determined to bounce back from this situation in her life. It took her six long years of relentless determination and undying faith in herself to deal with all that life threw at her one thing after another during that period. Passionate and self-motivated, Nidhika repeatedly defied expectations and successfully demonstrated that in life, the only limits we have are those we place on ourselves. During those years of intense life transformation, Nidhika realized that there was a bigger calling in her. She discovered her passion for helping people take immediate control of their mental, emotional, physical and financial destiny. This inspired her to initiate her quest for personal leadership, empowerment and intentional living. She was determined to be nothing but the best in the domain of life transformation. During her growth journey, Nidhika was trained and mentored by some of the great teacher leaders of the 21st century – Anthony Robbins, T. Harv Eker, Blair Singer, Robert Kiyosaki, Les Brown, Alex Mandossian, Paul Martinelli, Dr. Randin Brons, Denis Waitley, Clinton Swaine, Larry Gilman, Roddy Galbraith, Brian Tracy, Gerry Robert and John C. Maxwell. In fact Nidhika is a Certified Coach, Teacher and Speaker with The John Maxwell Team, an Internationally Certified Success Coach, Master SPIRIT Life Coach, Theta Healing® Practitioner, Access Bars® Facilitator, Internationally Certified Master Facilitator and NLP (Neuro-linguistic Programming) Master Practitioner and Transformation Coach. Nidhika is also the ALL Ladies League Maharashtra Chairperson For Coaching. She recently addressed the Annual Women Economic Forum In New Delhi on self-leadership and unleashing personal power. Nidhika is well known for her keynotes in the area of mental health, self-image and emotional mastery. Many of her blogs on these subjects have also been published on Thrive Global and Huffington Post, USA.
Economic Times Newspaper – Mumbai recently did a feature on her in ET Women Entrepreneurs Section. Mumbai Mirror also covered Nidhika’s incredible story on 12th August 2017. Nidhika’s Book Launch was the talk of the town on Bombay Times Page 3 on 28th September 2017. Nidhika is also the official Life Coach Of Miss Diva Universe 2017 Finalists. She is currently mentoring them on unleashing their personal power through self-awareness and teaching them multiple peak performance strategies as well as alternative healing therapies to regain peace and inner strength on demand.

Honours & Awards
Nidhika has been awarded the WOW (Winners Of Worthiness) Women’s Excellence Award for WOW Women Of Substance Courage, Resilience And Determination.
Nidhika has also been awarded the ‘Distinguished Trainer’ award by the Times Ascent World HRD Congress at the National Awards For Excellence In Training & Development.
Nidhika recently got recognised internationally and received the ‘Distinguished Trainer Award’ at the Asia Training & Development Awards, Singapore.
Nidhika also received the ‘Award For Best-In-Class Life Coach & Facilitator’ at the Asia Coaching Leadership Excellence Awards, Singapore.
All Ladies League & Women Economic Forum recently presented Nidhika Bahl with the Award of Exceptional Women Of Excellence.
These awards have been conferred on Nidhika for excellence in Training, Coaching, and Consulting using innovative experiential learning methodologies for training effectiveness. Nidhika conducts her signature workshops under the banner – The Game Of Life®. She brings all her learning to her audiences with understanding, awareness, simplicity, love and compassion. She knows what will motivate them, what will drive them and what will inspire them. Nidhika often says that ‘Life is too short to keep hitting the snooze button!’ and so her mission is to help people awaken to the possibilities in their personal and professional lives. Nidhika is obsessed with providing solutions that inspire people to move out of mediocrity and take a front-row seat in their lives, living out of their highest potential.