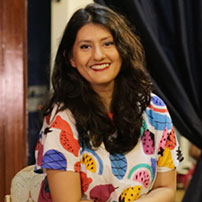 Nida Sheriff is an activist, filmmaker and writer living in Bangalore. Nida co-founded Chayn India in 2015, a branch of Chayn – a global volunteer network addressing gender-based violence by creating intersectional survivor-led resources online. Chayn has reached more than 200,000 people and 700,000 views across the world. In 2016, in partnership with Avani Parekh (Lovedoctor.in) and Raj Patil, Chayn India co-founded Snap Counsellors, a micro-counselling service for teens on popular social networking app Snapchat. Snap Counsellors has since helped hundreds of teens across the globe and has been featured in The Huffington Post, Tech in Asia, Teen Vogue, and many more.