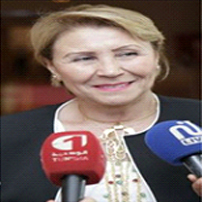 Politician and activist, H.E.Neziha Labidi Minister of Woman, Family, Childhood and Seniors is graduated from Pantheon, Sorbonne University in 1979, where she has conducted a number of research and studies on the Arab and Muslim civilization including a research on “Passion and Love in the Ancient Arab Civilization”, and then a research on “Some Aspects of Arab medicine in West Muslim World”.

With a doctorate from Sorbonne University, a Diploma of Advanced Studies in Education, a Masters degree in methodology of research and translation (Arabic/French -French/Arabic), a license in education and a diploma in Law and Political Sciences from the University ASSAS Paris2. Mrs Neziha Labidi has accomplished additional studies in social psychology, Child psychology, in general sociology, in anthropology, in compared Semitic languages, in sciences of communication and in history of political thought to contemporary Arab.

H.E. NézihaLabidi has served as Minister of Women, Family and Children in the government of Youssef Chahed since August 2016. In July 2017, she passed a law against violence against women. The text strengthens the protection of women against all forms of violence, and specifically removes the possibility for the perpetrator of a sexual act with a minor to avoid prosecution by marrying his victim, so amending very controversial Article 227 bis of Tunisian Penal Code. The age of sexual consent for adolescents was also upraised from thirteen to sixteen age. After growing up in Tunisia, Néziha Labidi moved to France in the 1970s to join his immigrant parents. She completed her graduate studies and obtained a master’s degree in modern languages and a master’s degree in teaching from Panthéon-Sorbonne University in Paris (1972-1979). She returned to Tunisia in 1980. She taught Arabic literature in Arabic and French schools and served as a professor. In 1995 she began her political career as a regional councilor responsible for education, culture and training for the Department of Education. Follow NézihaLabidi on the portal of the Tunisian Government https://fr.tunisie.gov.tn/membre-de-gouvernement/35/3-labidi.htm

She has had numerous contributions within the regional and international sphere: from ALECSO to UN and ECA as consultative member and an expert in the assessment of the Millennium Development Goals (MDGs).

Author of a many publications including a number of Translation” the Horla” by Guy de Maupassant, “Anti-memories” of André Malraux, “Sahertou minhou ellayali” of Ali Douaji, and “Kholkhal Aycha” of Tayeb Fkih.

She was active in the Trade Union work with the Union of Students of France (UNEF), where she represented the North Africa students. She acceded to the “Movement for the liberation of women MLF” whose president was Gisèle Halimi , and with Simone Veil in 1972 to support the law on abortion.

Follow NézihaLabidi on the portal of the Tunisian Government https://fr.tunisie.gov.tn/membre-de-gouvernement/35/3-labidi.htm