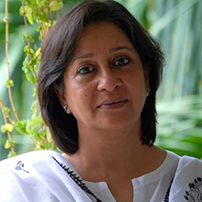 Neerja Poddar has been in the practice of complimentary healing sciences for over 15 years. She has many years of hands-on experience in Behavioral, Psychological, Energetic and Spiritual Therapies. She teaches Hypnotherapy, Access Consciousness BARS, Access Consciousness BODY PROCESSES & conducts various other self-empowering workshops.

She has held talks and workshops for Clubs, Schools and Universities, Companies and other groups like Rotary Clubs. She practices an integrated system by using the techniques of Clinical Hypnotherapy, Metaphor Therapy, Emotional Empowerment Technique and Family & Systemic Constellation and Access Consciousness techniques to help people find solutions to their issues.

What some of her clients are saying about her…

“I was in great physical pain the doctors called it spondylitis and after all the treatment I felt no better. I goggled hypnotherapy and came up with NeerjaJis name. I had no idea my life was about to change she ran my “BARS” and I started feeling so much better. It worked at such a deep emotional level that it made me start believing in Access Bars Completely. Neerja Ji is such energy that I feel alive when I am around her.” Suman

“I went to Neerja, about 2yrs after starting my business, as I felt the need to earn and grow my passion, both monetary and a way to keep my mind well occupied. I did 1 session of the “money” healing with her and then after about 3 months, I reaped the results….my store almost did more than double sales. Suppliers I was unsure of, agreed to work with us. So it was more than just income…..quite unthinkable. I feel positive energy just flowed in.Other personal issues also seem to be falling into place steadily.” Anita

“To tell u a great fact that I myself got benefit from your Hypnotherapy session which I attended for a day, and later I got much benefit in my mind through it The normal trend of the thoughts about thunder flash high pitched sounds which always used to effect my mind every times even in a clear day for almost a long time been regulated after conducting your One Day Session” Abhijit

“My wife Tania has been a patient of what has been previously detected to be severe bipolar disorder. But later her Doctors detected that to be a case of Paranoid Schizophrenia. When I sought for your help, she was schizophrenic, and under heavy dosage of tranquilizers, almost unaware of her surroundings. When I came to know of your process of treatment, I had no idea of your way and also I must admit that I did have doubt of its efficacy. But now, as she is under your treatment for more than a year, she is almost back to normalcy in all respects and being her husband I must admit that only medicines would never have done such a magic cure for her within such a short time. Your process of treatment had brought her composure back, and one again she is back to her own lively self that she formerly was. I only wish that for all those who are affected with such disorder, they can have their life back to normalcy if they avail this treatment.”Debdatta

“She is one of the best therapists in the country. My life is completely transformed because of her. ”Nikhiel