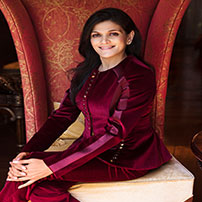 Through numerous initiatives and collaborations with various organisations, Mrs. Neerja Birla endeavours to reach out to various factions of society in order to empower them to lead fulfilling and enriched lives. She is the Founder and Chairperson of Mpower, a movement that aims to affect a positive change in the attitudes towards mental health. Through Mpower, Mrs. Birla hopes to spread awareness about mental health, alleviate stigma, and provide quality care to individuals from all walks of life and from all sections of the community. She is a strong advocate in the field of education. Her endless love for children is reflected in her dedication to her role as the Chairperson of The Aditya Birla World Academy, which is a pioneering educational institute. In line with her staunch focus on the holistic development of children. It has been ranked the 3rd best international school in Mumbai and the 6th best international school in the country. Mrs. Birla is also the Chairperson of The Aditya Birla Integrated School, which provides state-ofthe- art holistic and personalised learning environment to children with learning and intellectual disabilities. It has been ranked as number 1 in India under the Schools for Special Needs by EducationToday.co. A source of inspiration and a woman with great zeal, from setting the strategic direction to overseeing that the operations are in-line with her vision, Mrs Birla plays a hands-on role across all these organisations on a day-to-day basis. She also serves on the Board of Pratham and Make-a-Wish Foundation while being actively involved with NGO’s like Muktangan, Save the Children and Seva Sadan. For her tireless commitment and influential work, she has been honoured with the Icon of Excellence Award by FICCI-FLO – Sambhavaa, as well as the Woman of Excellence Award by FICCI’s
Ladies Wing. For her contribution to society, she has been honoured with the Hall of Fame award by the Hello Magazine in March 2017.
For her commitment to the cause of stamping out the stigma around Mental Illness in India, she has been honoured with the DEVI Award by the New Indian Express in December 2017. Holding an Honors Bachelor Degree in Psychology from the University of Derby, she is married to
Mr. Kumar Mangalam Birla and is the proud mother of three successful and loving children, Ananyashree, Aryaman Vikram and Advaitesha. Her role as a mother is the closest to her heart. An outdoor sports enthusiast, she is an avid reader who finds solace in listening to music and wishes to call herself a traveller.