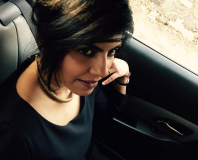 Celebrating her 22nd year in journalism, Neena Haridas started her career as a rookie subeditor at Business Standard. Even as the Union Budget, finance ministers and the stock markets kept her on her toes, she changed course and moved to the exciting world of politics with The Pioneer newspaper.

This was followed by a risky jump into the world wide wide web to rediff.com at a time when internet was still unheard of in most homes. Here, she covered General Elections, chased corporate honchos and politicians.

But it was the human face of hardline journalism that changed her career path when she was given the opportunity to cover the infamous hijack incident of IC-814 Indian Airlines aircraft.

Neena was the first Asian to win the International Online Journalism Awards 2000 from the University of California for the Best Human Interest Stories in the Breaking News Category for her stories on the victims and families of the IC-814 hijack in Qandahar. Convinced that the real stories are about people and not politics, she joined The Telegraph newspaper, stepping once again into the world of print.

A pedantic journalist, Neena joined the Hindustan Times where she eventually took over as the Editor of HT City, the daily lifestyle supplement of Hindustan Times.

Six years later, she ventured into television journalism as part of the launch team of NewsX. After travelling across the country working on news documentaries covering women and gender issues, Neena reinvented her career once again by taking over as the Editor-in-Chief of Marie Claire India. She explored the world of lifestyle magazines by observing the incredible and surprising stories behind luxury, fashion and all things beautiful.

Neena is part of a small panel of jury that selects the winners of the annual Marie Claire Prix d’excellence de la Mode. Through her media campaigns, features and columns, she has worked extensively in the area of gender equality and was awarded the Art of Living award for Best Journalistic work for women empowerment.

Through her lifestyle journalism she brought fashion out of the haloed circles of society and the runways into the homes of people like us. With her deep belief that a modern woman must think smart and look amazing, she worked on several mentoring, and informative campaigns that were aimed at one thing: Knowledge is the only must-have accessory every woman must possess.