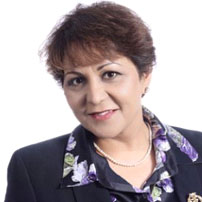 Member of the European Parliament for the West Midlands

Neena was previously an MEP for the West Midlands from 1999 to 2009. Prior to becoming an MEP, she was chief executive of ASRA Group and the Newlon Housing Group. Neena sat on the Budget, Legal and Industry Committees in the European Parliament. Since 2009, she was an MD for Public Affairs and from 2010 she worked for SAS Software, as Vice President Corporate Affairs (Europe and Asia Pacific).
Neena was awarded her first degree by Liverpool John Moores University (BA Hons Social Studies) in 1979, and she completed a postgraduate professional qualification from the Chartered Institute of Housing in 1986 and the London Business School SEP in 1996. She is fluent in several Asian languages and Italian, and is currently studying French and German.