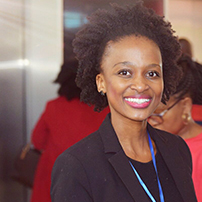 Miss Ndoni Mcunu holds a Master’s Degree in Science (MSc) in Applied Environmental Science. She is currently pursuing a PhD (Doctor of Philosophy) at the Global Change Institute at Witwatersrand University. Ndoni is also the founder & member of Black Women in Science (BWIS) a registered non-profit organization which aims at providing knowledge and awareness of science and research for rural women. She aims to influence young females to pursue a career in Science. She was selected as the 200 Mail and Guardian Young South Africans, under the education sector 2016. She is a Mandela Washington Fellow 2017, selected for her contribution in Civic Leadership development in Africa for her work in BWIS. She is also a Greenmatter Fellow for her academic research in climate change and agriculture. Miss Mcunu has also been listed as the Top 50 most Inspiring Women in Tech in South Africa in 2017, which is an award issued by the Kingdom of the Netherlands and South Africa. She has also been named the Top 50 Women in tech for SME South Africa.Black