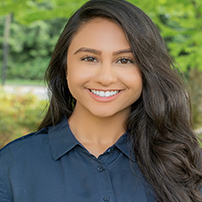 Born and raised by immigrant parents and grandparents on a small island on the coast of Northern British Columbia, Navneet Kaur Nanan is an ambitious young woman.
She will soon be the first woman in her family history to receive a university degree. She is studying business and political science in school, and aspires to one day pursue a career in acting.
She is a former Miss Northern British Columbia, Miss British Columbia, Top 5 at Miss Canada. Her life in pageantry is hinged upon her passion to work with and uplift women and girls in her community and beyond.
She was selected by the German Embassy to represent Canada at the International Forum of the European Youth Parliament where she was appointed to sit on the Committee for International Women’s Rights where she presented the hardships faced by Syrian female refugees.
She is the youngest member on the National Board of Directors for the World Sikh organization in Canada, and has worked on the global One Billion Rising initiative to end rape and sexual violence against women.
Navneet Kaur believes that women’s empowerment is a lifelong commitment and feels blessed to be here in Delhi continuing on her journey with us