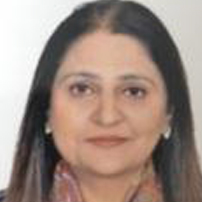 Ms. Nandini Gore, Partner at Karanjawala & Co. and Advocate on Record at the Supreme Court of India, has been practicing since 1988 and specializes in Litigation, Arbitration and Mediation practice. She is perused her LLB from Campus Law Centre, New Delhi. Ms. Gore has been ranked by Chambers and Partners Asia 2012, 2013, 2014, 2015, 2016 and 2017 for her outstanding service. She has also been listed by the Lawyer’s World 2015, 2016 and 2017 in the Premier 500 category. She has been awarded as Prominent Women in Law Award 2016. She is also figured in Leaders in Law in commercial litigation and mediation for 2017. Ms. Gore is known for her drafting skills and all round knowledge of rules and procedures, particularly for her expertise in handling complex & constitutional matters in Supreme Court for the Firm. She has also handled high profile royal family disputes, matters pertaining to environment and vehicular pollution, matters involving laws relating to mining or iron, ore and coal and also disputes relating to drugs and pharmaceuticals. Apart from Supreme Court practice, she also attends to matters in high courts on a pan-India basis, Appellate Tribunal for Electricity, National Green Tribunal, Company Law Board, Mines Tribunal etc. She has also appeared before various Commissions of Inquiry set up in India to investigate politically sensitive events that have occurred which the Government of the day felt were of sufficient importance to merit the appointment of a special commission of inquiry. Ms. Gore is a certified mediator from the Supreme Court of India at the panel of Supreme Court Mediation Committee. In addition, she has acted as mediator in various matters at the Delhi High Court Mediation and Conciliation Centre. She has attended the Advance Training Programme in Mediation conducted by the Mediation and Conciliation Committee of the Supreme Court of India. She has also attended the Advance Course on Mediation at the International Academy of Mediators at Toronto, the 2014 Fall Conference organized by the Chicago Bar Association and International Academy of Mediators in Chicago and the Fall Conference 2015 organized by the International Academy of Mediators in Baltimore. She also attends Advance Training conference in Mediation at San Francisco, USA. She has conducted several training sessions on mediation, including the session at the Asia Pacific International Mediation Summit, 2015 held in New Delhi. Ms. Gore has also attended Global Fall Conference 2016 on Mediation and Alternate Dispute Resolution at Singapore and Global Fall Conference 2017 at Chandigarh, New Delhi where she was invited as a Speaker. She has also been elected as the Secretary of Supreme Court Advocates-On-Record Association. Ms. Gore has been trained in time limited and advanced mediation techniques. She specializes in high conflict mediations involving divorcing families, partnerships, employment disputes, probate, real estate, commercial disputes and other complex civil lawsuits. She has successfully resolved hundreds of disputes both privately and as a court appointed mediator. Her pragmatism and all round professionalism has been highly valued by clients