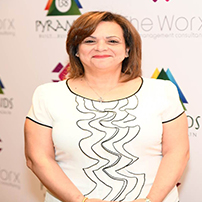 Neamat developed a passion for events from her early years and she dedicated her career to this industry working on both sides, both the client and the agency sides, when finally she decided to open her own event management consultancy.
Neamat first event focused job was as an Event Planner in the Egyptian Stock Exchange in May 2004, among her key achievements there was organising the 100-year anniversary of the Egyptian Stock Exchange. She then moved to Promoters Egypt, where she worked on Concerts for Amr Diab and Hakim, Corporate clients like Mobinil and Coca Cola and the Air Show AVEX.
She later joined Broadcast Film Production and Events where she assumed the role of General Manger. She started up and structured the events department in the company and attracted clients like Frito-Lay and Mobil
Moving back to the client side, Neamat joined EFG Hermes as a Regional Events Manager, where she held a diversified portfolio of events, such as The ONE-ON-ONE Conference held in Sharm El Sheikh, Egypt in 2008 with 650 key stakeholders attended the 5-day Conference, boasting a 50% increase in attendance over the previous year. ACCESS 09 held in Dubai, UAE in 2008 and 2009. EGYPT CAPITAL DAY, LONDON, UK in 2009: a one-day conference was co-organized with the London Stock Exchange to attract foreign direct investment to the MENA region.
Among her main achievements is holding the Official Gala Dinner of Economic Development Conference, Sharm El Shiekh 2014.
Finally, with The Worx, Neamat aims to take aid in growing the event industry Egypt and support in putting Egypt back on the map of Event Destinations