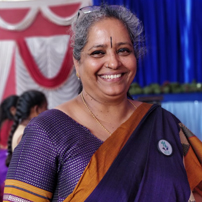 A co – founder of Hasiru Dala an organization of wastepickers organization in Bangalore that has reached to about 7500 wastepickers in the city and also co-founded Kagad, Kach Kashtakari Panchayat (KKPKP), union of wastepickers in Pune in 1997
Her passion is to work with the unorganized sector of labour who constitute 90% of Indian labour. She has also worked on the issue of violence against women for over a decade.
Her main focus now is on inclusion of wastepickers in the Solid Waste Management process of Urban Local Body. In Bangalore city Hasiru Dala is working on integrating wastepickers in providing services to bulk generators and managing Dry Waste Collection Centers. Similar effort is made in Mysore, Tumkur, Nelamangala, Tyamagondala, Chamrajnagara and Nanjangudu.
Nalini has trained several hundred wastepickers about new ways of solid waste management by Urban Local Bodies and encourage wastepickers to work on processing organic waste including operation of bio- methanation plants and composting, trained many Urban Local Body officials and elected representatives on zero waste management and integration of informal workers in solid waste management in her role as coordinator of Alliance of Indian Wastepickers, a national network of wastepickers’ organization.
Lived in the United States for a decade and worked on violence against women and children. She facilitated passage of a legislation to support victims of Human trafficking in California
She has won many accolades for her work including the Kempegowda Award 2015, from the City of Bangalore. Finalist for Namma Bengaluru Award 2015,. Women of the year “Shining star” award 2016 by CKC group, She was chosen as one of 100 women in India who make a difference in the society by BBC.Com. She is also been future in a Coffee Book. She is also received Jijabai Award from Shivaji College , Delhi University. “Vasundara Mitra” Award 2016 by Kirloskar Ferrous Industries Limited. Recently featured in a book “Dream Chasers” Women Entrepreneurs from the south of Vindyas
An award from the Santa Clara County Human Relations Commission, honored by the San Jose City Government for her work with immigrants, a Certificate of Honour from the Governor of California, Arnold Schwarzenegger and a Star Award from the Asian Community in San Francisco Bay Area.