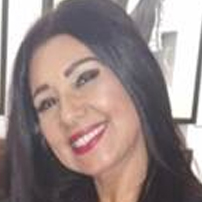 President of the Federation of Moroccan Couture & RYMA Couturiere

A graduate of the prestigious Syndicale de la Couture Parisienne, Najia Abadi has made use of her talent for ingenuity to serve the subtle current of the Moroccan fashion, mixing know-how and inspiration drawn from the ancestral culture of her country .
This is how his creations, while moving away from the traditional caftan’s cut and revealing a sense of modernism acute, that it has shown his mind turned towards harmony and happy exchanges. The European wedding dress, and its refinements pushed to the extreme, served as a framework for its current research that cultivates the care of detail and delicate work. From her passage to Paris, to London and Geneva, she kept the sense of international fashion and haute couture. It is clear from these works that the existence of a true form of artistry and inventorship, which is neither inherent nor blocky, has become the norm, and it has transformed princesses into caftans and thus gives them a personal touch of modernity. The whole conceived like an impressionist painting, the painting being other of its given, it is inspired by the French painter Monet. Najia Abadi is today one of the most confirmed stylists of her generation. Wanting a real fascination with the architectural dimension of fashion, work is borrowed from a major reflection on the body-space dialectic. A concern that leads her to invest in the champagne of the performance on live model and the happening mixing worlds of fashion, dance and plastic art. Najia Abadi has seen her work exhibited in many prestigious international galleries. She has participated in the cultural events for the promotion of Morocco abroad: The USA – Chile – France – England – France – Spain – Italy and … She is the Founding President of the “FCTM” Federation of Traditional Moroccan Couture since 2005 President and initiator of the event «Fashion Days Morocco» which was born in 2009 at the mythical hotel La Mamounia Marrakech. They are inspiration For me, the sea is a source of inspiration and creation and every movement of wave gives me a silhouette and inspires me for a dress.