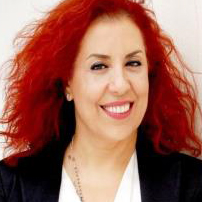 Najat is an award winner of Harvard’s Michael Porter All World Program for the fastest growing company and highest intensity serial woman entrepreneur for two consecutive years. She is a pioneer in media and communication in the Middle East who began 20 years ago by establishing the first documentary production company in the region. At a young age she was entrusted to launch and manage the top two television stations in the Middle East, Orbit Al Thania and LBC Sat.
She is CEO of Firehorse since 1999 where she leads a large team of media producers and communication experts designing and delivering quality television programs on topics including entrepreneurship, policy development, political and historical themes. Her award winning documentaries include “Religions of the World,” “The Great Exchange”,” Hezbollah Unveiled,” and “The Question of Arab Unity.” Her latest documentary is a five part series on Bachir el Gemayel, the assassinated Lebanese president, who was highly acclaimed by the media. You can find her talk on TedX Lebanon where she shares part of her experience.
She is founder and CEO at present of TRIARC the first stock footage library representing videos of the Middle East. She is a member of renowned international media platforms including the international Emmy jury.
She is a founding partner of Beyond Reform & Development, a social enterprise specializing in policy, public management and capacity development across the Arab region. She is an activist at heart and has supported charities and non-profit organizations across the Middle East and North Africa including Libya, Kuwait, Saudi Arabia, Jordan and Iraq.
Najat has transformed her unique experience into signature educational programs for youth and women in Lebanon and the region. She has designed training programs, courses and mentorship platforms for the American University of Beirut, Saint Joseph University, ALBA, and Colombia
University as well as for multiple international donors such as UNDP, European Union, and USAID. Najat frequently trains senior public servants in the UAE and Saudi Arabia on