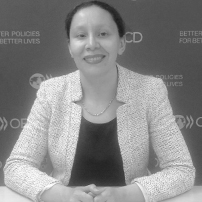 Naima Smaini is a Policy Analyst in the SME and entrepreneurship division of OECD’s Centre for Entrepreneurship, SMEs, Regions and Cities, where she coordinates the Centre’s Women’s Entrepreneurship Initiative, and also works on SME access to finance. Before that, Ms Smaini was a Principal Economist at the European Bank for Reconstruction and Development in London, working on financial sector development. Ms Smaini started her career at the Banque de France, where she conducted off site and on site supervision of financial institutions. She was also a member of two colleges of European supervisors. Ms Smaini holds a Magistère d’Economie, with high honours, joint Université Paris I Panthéon-Sorbonne, ENS Ulm and EHESS, and a Master in Economics, with high honours, from the Ecole des Hautes Etudes en Sciences Sociales in Paris. She also graduated from Sciences Po Paris, where she studied Public Affairs.