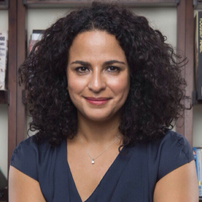 In 2002, Nadia and her sister co-founded Diwan, a small bookstore in Cairo. Over the following 14 years, it grew into Egypt’s leading chain, currently with 10 branches. Nadia has been on Forbes Magazine’s “The 200 Most Powerful Women in the Middle East” for three years running. She holds two M.A. degrees—one in Social Anthropology from the School of Oriental and African Studies, University of London and another in English & Comparative Literature from the American University in Cairo—and is currently working on a third in Creative Writing at Birkbeck, University of London. She has also co-edited with her sister the first photographic collection of Egyptian women entitled, Daughters of the Nile: Photographs of Egyptian Women’s Movements, 1900-1960 (Cairo: American University in Cairo Press, 2001). The Entrepreneurs have also benefited from a range of local services including mentorship and a needs assessment.