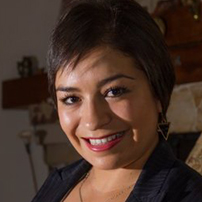 CEO , She Is Foundation

MBA focused on management of social projects and international development, Business Administrator, with complementary studies in Sustainable Development, International Humanitarian Law, Human Rights and Youth, and History of Political Economy among others by Universities such as Harvard University, University of Buenos Aires, Complutense University of Madrid, London Business School.
She has worked in international development organizations such as the Inter-American Development Bank IDB and the Organization of American States OAS, currently President of the SHE IS Foundation, model of economic empowerment and social inclusion for women victims of conflict, in situations of vulnerability, indigenous communities, among others. , developing peace building projects and entrepreneurship in rural areas. Leading activist in the human rights of women, generating a significant change in the context of violence in Colombia towards rural women in departments such as Magdalena, Putumayo and Guajira where more than 300 women have been strengthened to break poverty circles and generate productive projects that allow to visualize their stories, generate income and empower themselves in their community. I generate the SHE IS model that breaks poverty circles and is a holistic model that allows impacting the number of women who suffer violence, impact on the quality of life of women, income generation and access to education.
Selected to be Chairperson by the ALL Ladies League (ALL) in Colombia. Professor of the Pontificia Universidad Javeriana de Bogotá in areas of social innovation and entrepreneurship and integrates the committee of women leaders of the Americas of the OAS and the Documentary Center Foundation of Spain.
AWARDS
• 4th place of the prestigious “IDEAS FOR ACTION” program of Wharton School and the World Bank (Top 10) Washington D.C
• Third place Schmidheiny Award in Social Innovation. Viva Idea Costa Rica
• Women entrepreneur 2017 by the OAS, YABT, WORLD BANK AND PEPSICO.
• Chosen and awarded by the UN for the “Women for Peace” program at University for Peace Costa Rica 2017
• Leader Young Woman CAF 2016
• National Award for Social Responsibility, as Women Manager of Equality, PROBONO PERU Foundation 2016
• World Award given during her participation in New Delhi, India: “ICONIC WOMEN NURTURING TO CULTURE & ECOSYSTEM FOR INNOVATION” Iconic woman around the world, awarded for building innovative ecosystems for women for two consecutive years. New Dehi – India. (2016 – 2017).
• Decorated by the City Hall of Cajicá- Colombia and by the City Council in September 2014 and February 2016 as “Woman of the Year”.
• Decorated for its Development of Alternatives for a Better World and respect for Human Rights, granted by the Pontificia Universidad Javeriana de Colombia.
• Nominated to receive the NELSON MANDELA – GRAÇA MACHEL INNOVATION AWARDS awards worldwide in the category: Youth Activist by Civicus: World Alliance for Citizen Participation, 2016, Johannesburg, South Africa
• Received the “Young Ibero-American Woman 2015” award, granted by the Ibero-American Youth Assembly, the Organization of American States OAS and the Government of Peru, 2015 Ica-Peru.
• Was chosen by the Department of State and the White House at the level of “Emerging Entrepreneurs”, to participate in the GLOBAL ENTREPRENEURSHIP SUMMIT GES2015, US Department, Nairobi, Kenya. Representing Colombia with the Gender and Entrepreneurship project “SHE-IS” Washington 2015
• Winner of the Start-Up Weekend, Inter-American Development Bank IDB 2014, Washington D.C.
• Elected to represent Colombia in the IV Summit of young people of the Americas in Panama, within the framework of the VII Summit of the Americas, 2015.