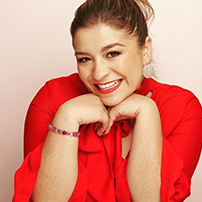 International speaker, president and founder SHE IS Organization, SHE-IS, which plays a leading role in supporting and creating productive units of female war victims from vulnerable populations, with the first social brand of empowerment and the development of a social model. She’s taken part in international conferences and has been invited to peace-making processes and summits on gender equality, entrepreneurship and post-conflict issues, as well as on solutions for women’s economic development and empowerment. She recently took part in peace agreement processes in Colombia in critical points of armed conflict, such as Corinto-Cauca, as the Andean Parliament’s young peace agreement mentor. Business administrator with a degree from the Pontifical Javeriana University of Bogotá and an MBA focused on project management and international development from the University of La Rioja, Spain. She’s a social entrepreneur with certifications in project management, coaching & leadership, sustainable development, international humanitarian law, human rights and youth issues, from institutions such as Columbia University, the University of Buenos Aires and the Complutense University of Madrid. She’s developed social impact projects for countries in Central and South America, such as Guatemala, Panama, Peru and Colombia. She’s been a consultant for the Inter-American Development Bank (IDP) and the Organization of American States (OAS), where she was involved in the creation of the innovative platform, ConnectAmericas, which connects small and medium-sized companies that are looking for training, financing and investors. She’s also worked with the Department of Integration and Trade and the Inter-American Commission on Human Rights in Washington D.C. She’s won awards and prizes on various international stages for the development of initiatives and entrepreneurships which promote gender equality, sustainable living and human rights: Harvard University (Creation of the Social Platform for Immigrants, top 5, 2013); IDB(Inter-american development bank)(Winner of the Start-Up Weekend 2014 with her social entrepreneurship project in sustainable construction); Washington D.C. She’s been invited as a young ambassador to the UN’s World Youth Assembly in New York, “Innovative Solutions: Youth Entrepreneurship for Sustainable Development. UN YOUTH ENVOY”. She was chosen to represent Colombia as a YABT reporter on youth and entrepreneurship issues at the 4th Youth Summit of the Americas in Panama, as part of the 7th Summit of the Americas. She represented Colombia on the 22-country panel of Ibero-American Women in Ica (Peru), through the Assembly of Young Ibero-Americans and the OAS. She was presented with the “YOUNG IBERO-AMERICAN WOMAN 2015” prize, awarded by the Government of Peru, the Ibero-American Assembly, the Friedricht Ebert Organization and the OAS. She was chosen by the State Department, the White House and the Jonathan Orthmans Organization to attend the Global Entrepreneurship Summit 2015, which took place in Nairobi, Kenya, and was presided by President Barack Obama. She was the only Colombian at the summit, which is the world’s largest gathering of entrepreneurs. She was acknowledged by Kenyan newspaper The Standard as being one of the BIG HUSTLER MENTALITIES of the event. With a focus on gender projects, she recently represented Colombia at the Global Entrepreneurship Week in London as part of Virgin StartUp’s “Inspiring Women to Make it Happen” initiative, where she presented her project, She-Is. Cajicá Mayor’s Office decorated her with the 2016 Woman’s Medal of Excellence and Merit for her work in social development. She’s also received the decoration from the Pontifical Javerian University in Colombia for the development of alternatives for a better world. She was nominated for the NELSON MANDELA – GRAC?A MACHEL INNOVATION AWARDS 2016 for her project, SheIs. This provides the most important platform for civil society in the world, Civicus: World Alliance for Citizen Participation. She’s received an honorary mention as the co-founder of the 22-country Ibero-American Women’s Network. She’s been recognized by Colombian magazine, ALO, as one of Colombia’s powerful and successful female entrepreneurs. She’s given conferences and represented women with her gender equality project on the world stage in over 5 countries. She’s an activist and fights for social development and human rights. She’s been invited as the only Colombian to the International Women’s Economic Forum (WEF) in New Delhi, India, with over 126 countries present. She’s also been an Honorary Guest at the “Business for Peace” ceremony in the city of Oslo, Norway.