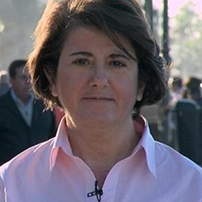 I am a veteran journalist with nearly 33 years of experience in broadcast and print media in Lebanon and the region. I also got PhD degree from City University, London, on Lebanese media and sectarianism.

During my career I have built expertise in the field of media development, working for different international and diplomatic organizations to design and deliver training in order to strengthen independent and quality reporting in the region. I am also an experienced lecturer at highly regarded Lebanese universities and have taken part in regional symposia and events about media and journalism. I am now keen for the opportunity to dedicate my time to my academic work and to pursuing my research interests.

BBC Arabic presenter of a weekly show ‘DUNAYNA’ a women show but not about women issues,
2014-present

I researched and directed a film on women in the Syrian revolution in august 2012. the film was shown in many festivals including the watch doc one in Warsaw in December 2012. http://watchdocs.pl/women_in_the_syrian_revolution-film-36-en.html

I have covered major Arab Summits in Doha and Kuwait (2009), as well as the Lebanese special tribunal at The Hague in the same year. I have reported on the intricacies of the Lebanese political crisis in 2007 and the 2008 sectarian clashes in Mount Lebanon and Beirut, which marked the first return to such violence since the end of the war. I have also been at the front line covering the Israeli war on Lebanon (2006) and the US invasion and war on Iraq (2003 northern Iraq, Kirkuk Mosul). I am responsible for covering the Lebanese presidential and parliamentary elections and major political events such as the Syrian withdrawal from Lebanon (2005), political violence between the Lebanese Army and Islamist groups in north Lebanon (2000).
I have also interviewed major political figures for BBC Arabic and represented and reported for the BBC from high profile international conferences concerning middle east issues, such as the Paris II conference on Lebanon and the first UN General Assembly meeting after the 9/11 attacks.
Lecturer, Broadcast Journalism, American University of Beirut
October 2010 – February 2011
I designed and delivered a course for students on all aspects of broadcast journalism with practical work.
Lecturer, Radio Programmes, Balamand University, Lebanon
October 2008 – February 2010
I oversaw the design and roll out of a practical-based radio training course for radio programming at the university.
PhD , City University, London
2009-2015
My research interests are focused on the rise of sectarianism in the contemporary Lebanese media. This topic is, sadly, of critical importance both in Lebanon and the wider Middle East. The title of my thesis is: Media in Lebanon: the Sectarian Role and Aspect.

Editor New TV station
1990 – 1997
I covered the historic Madrid Peace conference live from Madrid in 1991 and the signing of the Oslo Accords from the White House in 1993. I reported in-depth on four rounds of the Arab-Israeli peace negotiations from the US State Department between 1991 and 1993. I was one of the main reporters for the 1996 Israeli operation “Grapes of Wrath” against Hizbollah, which led to the Qana massacre.
.
Reporter/Editor, Voice of the People (Radio)
1986 – 1990
I was a reporter covering the civil war in Lebanon and introducing special reportage with live interviews with Lebanese citizens from both sides of the conflict, as well as special programming including contributions from the fighters on the front line.

I also worked on the coverage for the millennium anniversary of the Russian Orthodox Church live from Moscow in 1987, during a momentous period in history prior to the collapse of the Soviet Union

Ayam el Hijarah published by the Voice of the People, 1989

1. Set up and delivered three weeks training for radio journalists in RTM in Rabat (January 2007) for the BBC World Service Trust
2. Oversaw a one week training course in French (Journal parlé) for students (third year): University of Journalism in Rabat, Morocco. February 2007
3. Delivered a bespoke one week training on the coverage of elections for the Yemeni radio journalists from six provinces (2005), BBC World Service Trust
4. Organised and delivered a one week training programme for TV reporters from state and private reporters in Egyptian TV on the coverage of the parliament.
5. Designed and moderated a three day course for officers from the Lebanese army on how to deal with journalists (Organised by the Danish Embassy).
6. Managed and gave instruction for a five day course for journalists from Lebanon on working in hostile places (organised by the UNESCO)
7. Delivered a practical training course organised by Al-Hayat newspaper and funded by the British Council four young journalists from the Palestinian camps in Lebanon.
8. Oversaw a one week special training for students (year-4) at the University of Journalism in Rabat Morocco.(magazine radio) (November 2006), for the CFPJ (France)
9. Delivered a 6 D training for Syrian citizen journalists on broadcast journalism (September 2012) (Internews Europe)
10. Organised and delivered a 5 day training for Syrian journalists on ethics and practices in countries at war. (October 2012) (Henrish Boel)
11. organised and delivered a 3 day training for citizen journalists from Syria (May 2012) (Henrish Boel).
12. Delivered a one day training for citizen journalists from Syria on how to organize a media campaign on the internet, including ethics. December 2012 (Henrish Boel).
Awards
• Trophy (Honoring Female War Correspondents), Institute for Women’s Studies in the Arab World at the Lebanese American University, International Women’s Day, 2007.