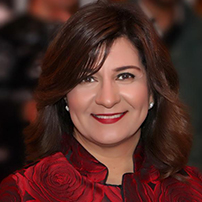 Nabila Makram Abd El-Chahid currently holds the position of Minister of State for Emigration and Egyptian Expatriates’ Affairs.
Born in Alexandria on the 13th of August 1969, she attended Sainte Jeanne-Antide School and received her Bachelor’s degree from the Faculty of Economics and Political Science, Cairo University in 1991. In 1993, Abd El-Chahid joined the Ministry of Foreign Affairs and began an esteemed career in the diplomatic sector. Some of the highlights of her career during her time at the Ministry of Foreign Affairs were serving as a Third Secretary at Office of the Assistant Foreign Minister for European Affairs in 1995, later on as Third Secretary, Embassy of Egypt in Brazil in 1997. She then became Second secretary, Consulate General of Egypt in Chicago from 2004 and in 2007 she was promoted to First Secretary at the Embassy of Egypt in Italy in 2007. In 2011, Abd El-Chahid’s diplomat journey reached new levels as she was appointed as Adviser of the diplomatic and consular corps management from 2011 till she reached the position of Deputy Consul General in Dubai from 2013.
Her hard work, dedication and impeccable record shed light upon her capability of becoming part of the Egyptian government and thus on the 19th of September 2015 she took oath in front of President AbdelFattah El-Sisi and became the Minister of State for Emigration and Egyptian Expatriates’ Affairs – bringing back the Ministry after 20 years of absence.
From her first days at the Ministry Nabila Makram Abd El-Chahid has shown specific interest in women related issues, specifically those of the Egyptian expat women, tying the second and third generations of Egyptians abroad to their homeland, working on combatting irregular migration specially for minors and paying close attention and working on solving issues related to Egyptians abroad in general. Abd El-Chahid set a standard where the Ministry of State for Emigration and Egyptian Expatriates’ Affairs becomes the government-back for all other Ministries when it comes to serving Egyptians abroad.
Abd El-Chahid is keen on staying a woman and kid advocate, she is also keen on tying Egyptians abroad with their roots in Egypt, and she works closely with Egyptian scientists and experts abroad as she is aware enough of the importance of bringing the latest technologies, researches and studies to be used and implemented in Egypt.
A mother, a wife, an achiever and a dedicated government official, Abd El-Chahid is a purposeful energetic Egyptian woman who follows her passion and plans ahead as she sets an example for modern Egyptian women and women world-wide in general to follow.