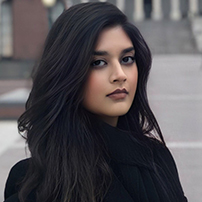 Nabila Jamshed is an international security and global governance professional currently working with the United Nations. Her assignments with the inter-governmental sector have included Public Policy Specialist with the United Nations Resident Coordinator’s Office in India, Political Affairs Specialist with the Organisation for the Prohibition of Chemical Weapons (OPCW) in The Hague during the chemical weapons crisis of Syria, and analyst with the United Nations Peacekeeping Mission in South Sudan during the war of 2016.
With a master’s degree in Global Governance and Diplomacy from the University of Oxford, Nabila joined the Organization for the Prohibition of Chemical Weapons during the organisation’s work on chemical disarmament in Syria, for which it was later awarded the Nobel Peace Prize.
She was then posted to an assignment with UN Peacekeeping, to Juba, South Sudan, consistently ranked one of the most dangerous conflicts in the world, where she worked with the Joint Mission Analysis Centre during the conflict of 2016, on security and crisis reporting and analysis.
She has also worked for the United Nations Educational, Cultural, and Scientific Organisation, and with the Asian Development Bank on regional cooperation in South Asia. While with the UN, she co-authored the UN Environment Programme and UNU’s Inclusive Wealth Report for 2014.
She has delivered seven TEDx and Hague Talks and delivered lectures on multilateralism in Geneva (including at the Weapons Governance Forum with), The Hague, and at premier institutions including the University of Oxford, University of Leiden, IIT Delhi, IIT Kanpur and Delhi University. She is also a specialist with the Washington DC based Women in Colour Advancing Peace and Security.