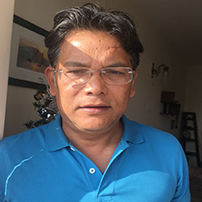 Mukul Chandra Gogoi, a post graduate in Business Management from Banaras Hindu University and a graduate in Economics from Hansraj College, Delhi University, currently operates his own project management consultancy firm out of Guwahati, Assam and Gurgaon. Starting his career with The Economic Times in the early 90s, where he spent a considerable number of years in handling interpretation of government policies in sectors such as infrastructure, agriculture and banking amongst others. Since leaving Economic Times, Mukul joined the corporate consultancy segment and after having worked with various companies including the Asian Development Bank as a PPP (Public Private Partnership) expert, Mukul set up his own project consultancy firm, Transbiz Associates Pvt Limited in Guwahati, Assam. He was also advisor, Tourism, Government of Assam between 2011 till 2014. Mukul currently resides in Gurgaon, Haryana.