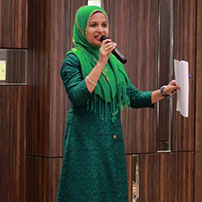 Mubeen has an enriching experience of 10 years in the corporate world by traveling to countries such as Netherlands, China, Singapore, and the USA apart from her work experience in India.

She left her lucrative career in the west to pursue her interest in storytelling and public speaking.

She has been part of storytelling session in Doordharshan Podhigai Television channel and Thanthi TV.

She has adorned the role of master of ceremony and also conducted educational sessions in various corporates such as Infotrellis, Accenture, Infosys, Fidelity, Daimler, and Redington.

She has conducted workshops for children for various age groups. She has trained almost 2000 children within 18 months.

She is regularly hosting a public speaking forum named “Tame the Stage” for young children. The program aims at bringing the children out of their shell and express themselves to the world.

She has penned recreating rhymes for children in a positive way of seeing life. It has got a viewership of more than 400k on YouTube during the time frame of 6 months.