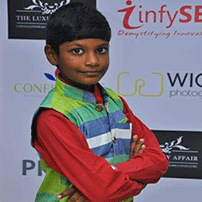 Mrithylesh D, a 10 year old budding magician from Namma Chennai is a child prodigy. Following the footsteps of his uncle who is a prominent personality in the field of Magic & Mentalism, Mr. Arun Loganathan, he started practicing from the tender age of 2. He has now grown up to be the only promising star in the field of magic in Tamil Nadu.
At the young age of 6, he created a record as the youngest magician to perform 19 magic tricks in 3min. His hardwork and talent took him to a stage where an acting opportunity knocked his door and that happened to be a movie based on children, Pasanga 2. He has also performed in many renowned TV channels such as Sun TV, Colors TV, Vijay Television and DD Podhigai.
Mrithylesh is a multifaceted personality who is doing good for himself in his academics, sports, yoga, chess and of course dance.