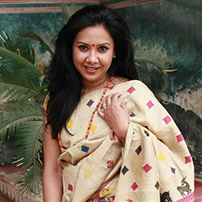 Mrinmoyee Goswami Sarma is one of the most successful artist of Assam who has rendered her voice as a vocalist in Radio, television, solo music albums, folk cult , regional folk music and so on. Trained in Hindustani Classical Music ,her musical journey began from the very tender age of 5. While she was studying in Maharani Gayatri Devi School in Jaipur, she gave her first musical professional performance in Rajasthan All India Radio Station. Even while she was getting trained in Hindustani Classical Music, her interest in western music grew with time .During her stay in MGD School , she won many prizes in the field of music.
After she left MGD, she joined in St. Mary’s School and started her western Music training from Rajeswar Bordoloi who taught her to play the guitar and piano and sing along with. Her sole interest in vocals always made her practice for perfection like her idol Joan Beaz, Janice Joplin, Sade. While in school ,she won many prizes for her singing skills. She was also known as the nightingale along with being the all rounder being the sports captain.
Her favourite bands during her teens were very unlike girls of her time and she loved and sang from bands like Pink Floyd, Uriah Heep, Guess Who, Eagles etc. Because of her passionate love for singing she had many musicians coming over to her place for jamming while practicing her vocals. When she was in college she won many more prizes and was judged the best singer in western music for 3 consecutive years.
Her mother influenced her to a great extent. But It was only after her marriage to Tirtharaj Sharma, who is an ardent music lover that she went in for professional music career and started singing all over northeast with her mentor Rajeshwar Bordoloi’s band. Throughout these years she was highly appreciated by her vocals.
She starter singing for the local bands like Moonwind and Vayu .Officially she joined Moonwind in 1996 , a local band with whom she has been singing for the 10 years now and have been performing throughout India along with the band to places like Delhi, Orissa,Mumbai,Ranchi and Jamesedpur. She also sang with the Band SHIVA from Kolkata for some time and performed all over Kolkata and also got the opportunity to go and perform in Australia with them.
The band Moonwind also has an album “Colour my Life “to their credit where in the title song among others have been sung by her.
In 2008 she got selected for Channel V’s popstar’s II and was among the top 10 contestant. The only reason she could not reach the top and form the band being because she was married and had a son. But there was nothing stopping her. For her she had a clarity on how to go about need her passion to love and do music. Music for her has been her strength and source of inspiration. She is a B.Sc First class First in Zoology and also an MBA from Guwahati University. She sings and practices everyday besides being full time mother, a tour operator, a business woman, secy of her aunt’s Mamoni Roisom Goswami’s trust and a wife. She was also chosen for Rotary International’s Group Study Exchange and was in Germany for a month in May-June 2010. Here also she was much appreciate for her singing and was also asked to join a band there.
Singing has got her much accolades and friends all over the music industry has also taken her places; she loves to sing jazz and blues. But her band mainly performs rock and pop numbers.
Presently she is working on solo fusion Assamese album in Mumbai.
She formed her own band named Mo& The Shooting Star in the year 2014.With her patronage the band has been making waves across the Western scene of the Northeast with their grand opening for “Smokie” in Shillong and continuing their journey performing regularly at various concerts, festivals, club, pubs all over Assam and Northeast. Their band play music of every genres but their fusion cult makes them unique.