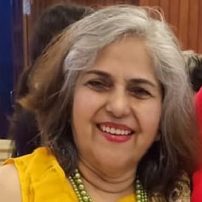 Iew Mridula Sharma is a post graduate in Political Science having studied subjects like the constitutions of the world, Political thought, international Law and public administration.

At degree level she has studied English literature and various forms of Psychology with abnormal psychology at the helm. Holds a Kovid degree (B.A), in Sanskrit.

Has been secretary for lioness club for a long period. Had an NGO where they taught computer education to the rural girls. This was there for 10 years Now closed. She has written books on varied subjects. Started a publication House for her own books. She runs an alternative health group, ‘Ah No Side Effects’ on face book that is related to alternative means towards health and has 38000 members. Another group that she runs on face book is ‘Reincarnation’ which has 11000 members.

She is invited to give talks on health from various organizations. Currently she is holding the Chairperson ship of the ALL Health Group, Karnataka where she has been arranging for talks and other interesting sessions on health on the ALL Health group. She is currently working on promoting Sanskrit language as the world has woken up to it. This is going to be the next big thing after yoga rather bigger as the west Is promoting it and US has also started a university for Sanskrit. She sends a few words or sentences to about a thousand people all across the globe. She has also started two groups with 400 members, where the first level of Sanskrit curriculum is taught. All this is free.