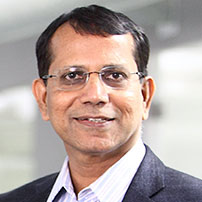 ● In 1996, Santhanam developed strategic blueprint for Saint-Gobain’s investments in Flat Glass in India.
● Over the last two decades, as Founder Managing Director of Saint-Gobain Glass India, Santhanam was instrumental in the Group’s investment of over € 800 Million in Flat Glass to create a Pan India manufacturing footprint across Tamil Nadu, Gujarat and Rajasthan starting with World Glass Complex at Sriperumbudur. He is responsible for Flat Glass businesses in Egypt and Malaysia.
● The Company has achieved Quality, Operational, Innovation and Market leadership position in India and has won numerous Regional and National Awards in Innovation, Brand Building, EHS, Water Management, HR Excellence, CSR, etc.
● Santhanam is an elected Member of the National Council of CII (India’s Premier Industry Association with over 8,000 Members) since 2006 and was the Chairman of the CII Southern Region (2013-14). Santhanam has been a founding champion of the “Indian Women
Network” (IWN) as part of the diversity agenda of CII.
● At CII National Council and CII Southern Regional Council he has been Chairman of several Committees, Sub-committees and Task Forces on HR, Skill Development, Manufacturing and Digital Excellence. He is playing an active role in shaping India’s policies in these spheres.
Academic Engagement:
● Member on the Board of Governors of Indian Institute of Information Technology, Design and Manufacturing (IIIT D&M).
● Founder Director of IIT Madras Research Park.
● Member of the Syndicate of Anna University nominated by Government of Tamil Nadu (2012-15).
● Santhanam obtained his B.Tech in Civil Engineering (1978) from Indian Institute of Technology, Madras and Post-Graduation in Management (1980) from Indian Institute of Management, Ahmedabad.
● At Grindwell Norton, a Saint-Gobain Group Company, Santhanam, started as a Management Trainee and ended up as a Member of Management Board.
Corporate Engagement:
● Independent Director on the Board of Titan Company Limited w.e.f. May 2018.
● Independent Director on the Board of Wheels India Limited w.e.f. September 2014.
● Director on the Board of Saint-Gobain Glass Egypt S.A.E. since 2011.
Other Professional Bodies:
● Santhanam as President of Employers’ Federation of India (EFI) during the year 2009 – 2010 was active in pursuing labour reforms with Government of India.
● Member of World Presidents’ Organization (WPO).
● Founder Member of Glass Academy, Glazing Society of India and former Chairman of “iGlass” – Indian Glass Association.
Awards & Recognitions:
● Conferred “Champion of Humanity Award” by Hindustan Chamber of Commerce in 2015.
● Awarded “V.C. Padmanaban Memorial Award” in the category of “Business Excellence leading to Development of Society at large” by Manappuram Finance Limited in 2014.
● Awarded Doctor of Literature (Honoris Causa) conferred by Hindustan University in 2013.
● Selected as “CEO of the Year”, a biannual award by National Human Resource Development Network (NHRDN) in 2008.
● Awarded “les Arches de la Croissance” (Arches of Growth), a global recognition from Saint-Gobain Group, for Innovation and Growth in 2005.
● Selected as a “Distinguished Alumnus” of IIT Madras in 2004.