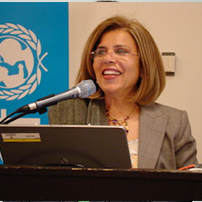 Member of Egypt’s Supreme Council of Culture and, Supreme Committee for the management of Egypt’s cultural heritage. She is a lecturer at the Institute for Diplomatic & consular Studies at the Ministry of Foreign Affairs.
Khattab is a career diplomat and, human rights advocate. She is Egypt’s former Minister of Family & Population, Former Assistant Minister of Foreign Affairs, Ambassador of Egypt to the Republic of South Africa, the Czech Republic and Slovakia, and vice chair of the United Nations Committee on the Rights of the Child in Geneva.
Human development career –  In 1999, Moushira Khattab shifted to the sphere of defending Women and Children’s rights. She is known for her ability to deliver and to build consensus around critical, culturally sensitive issues. She has engineered a paradigm shift in the protection, promotion, provision & monitoring the implementation of the rights of women and children in Egypt. She coordinated national efforts combatting all forms of discrimination and violence against children and women with special emphasis on girls. Combatting gender- based violence including female genital mutilation (FGM) and child marriage are some of her achievements with heavy involvement of civil society. Girl’s Education Initiative, providing quality active learning to poorer and marginalized girls; adolescents’ reproductive rights and combatting child labor, child abuse, neglect and inhumane treatment. She initiated, led and coordinated a national movement to support the most comprehensive rights based legal reform for children; crowned by the adoption of Law 126 in 2008 bringing Child Law in closer harmony with international human rights standards. The law criminalized trafficking in children, Female Genital Mutilation, child marriage and, child labor. Khattab played an instrumental role in bringing Muslim countries together to support the global movement for the rights of children. She Chaired the ad hoc UN intergovernmental expert group that formulated the UN Guidelines on Justice Matters related to children victims and witnesses to Crime adopted by ECOSOC in 2005.
Khattab coordinated, in close collaboration with civil society, the formulation of key national policy documents.
Khattab was the Vice-President of the International Bureau for Children’s Rights, Child Helpline International, a member of the “Women Leadership Council to combat trafficking in persons”, UNGIFT-. She Chaired both the National Committee & the steering Committee of Middle East & North Africa on Violence against Children. Dr Khattab has been a visiting professor at, University of Foreigners in Perugia (Italy), a visiting senior scholar at the Woodrow Wilson International Center for Scholars in Washington DC, and a mentor of the “Women in Public Policy project” initiated by Secretary Hilary Clinton.