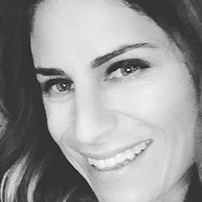 Monique Moizel- Rosenthal got her start as a squeaky wheel. She began her fashion career at Otis College of Art and Design, where she was fond of pushing the limits – and was eventually told to please leave to pursue something else. She quit and started her own successful fashion business, Topsy Turvy.
It set the tone for how she would be approaching her career, breaking new ground, rather than playing by the rules. And it’s what would define her success over the arc of her 20 years in the fashion industry. Among hundreds of stores across the US, Topsy Turvy became the top collection for the tween department at NORDSTROM. Businessweek named her one of the most successful entrepreneurs under 30 in the US. In 2003, as a young designer, finding her footing on the cutting edge, she started yet another successful company, Pretty Punk. Widely considered an overnight success, and a choice of many top celebrities including Paris Hilton and Shakira, Pretty Punk rose up quickly to be one of the biggest supplier of women’s fashion for over nine hundred stores worldwide. Her collection enjoyed seven years of success. During that time, she also worked closely with high-profile clients to create custom designs – most notably, designing for Shakira during her European tour in 2006. As the tides change, so do collections in fashion. In 2009, Monique started Woodleigh Clothing. Monique and Woodleigh made a big splash in Hollywood, the collection appearing on Extra, Access Hollywood, Marie Claire, People – and getting the attention of celebrities like Selena Gomez, who often wore her dresses on social media. Act two, as Monique was beginning to realize the success she’d been building, she went off script again. Her work was rewarding. The success she was having was hard won and sweet, and it was tempting ride it longer. But she knew she wouldn’t have much longer with her two girls. In 2013, with Blayke age 5 and Brooke age 2, Monique decided she wanted to step out of the fashion world to raise a couple of fashionable kids. When Blayke was seven, Monique noticed she was not keeping up in school and forgetting simple things. Blayke wasn’t acting like herself. She could perform tasks sometimes, as simple as walking or talking. Monique’s worry shot up even higher when Blayke had a seizure. Monique and Howie went to UCLA for help. After months of hospital stays and invasive testing with the skilled team at UCLA, it was the expertise of the Chief of Neurology at UCLA who started to zero in on what was going on with her daughter. Blayke was diagnosed with an extremely rare and complicated autoimmune disease that was causing her to have hundreds of seizures. It was a newly discovered condition, the first case identified just ten years earlier. It defined what would be a new challenge and new chapter in the life of her family. Monique was grateful she’d made that choice to step away from her career because she was in a position to really devote herself to Blayke’s health. Working so closely with Dr. Sankar and the team of Pediatric Neurologist at UCLA and seeing their excellence first hand, Monique realized she might be able to play a bigger role in fighting her daughter’s disease. While medicine is finding and diagnosing these new disorders more frequently, the demands on these doctors are growing. But the funding for these specific branches of pediatrics remain limited, unless they find a champion. Autoimmune epilepsy found that champion in Monique. There were many difficult months, testing and doing the hard work of figuring out what was wrong with her daughter. Once her treatment was on track, Monique turned her attention to bolstering the cause. She found that the fund-raising and support arm of this effort was trailing far behind the medical advances that are defining the treatment. Drawing on the same determined drive and skill set that brought her up the ranks in fashion, Monique started Pediatric Victory Foundation (pediatricvictoryfoundation.org). She’d been right there to watch as the team diagnosed and treated her daughter. And now she felt she was able to help them. Today, the foundation is becoming a true engine for change. In just three years, the Pediatric Victory Foundation has raised over ninety thousand dollars for new treatments and a broader reach for the care of these doctors. It just seems to be what happens when you give Monique a problem that needs to be solved.