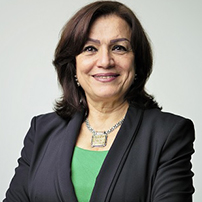 As a founding partner and Chairperson, Mona Zulficar overseas the performance and business development of Zulficar and Partners Law Firm, a leading law firm in Egypt. A practicing attorney for more than thirty-five years, she is a specialist in major restructuring, project finance and M&A transactions and has been consistently ranked by international legal directories as the leading and eminent Egyptian lawyer in banking, finance and M & A.

She is particularly recognized, locally and internationaly, for handling ground breaking and precedent transactions. These include the first Egyptian three BOOT Power Plants in 1998 and 2002, the first GSM Telecom Concession to MobiNil in 1998, the first commercial aircraft mortgage financing for EgyptAir in 1989, the first GDR issue and listing on the LSE for CIB in 1996, the first subordinated bond issuance for MobiNil in 2005, the first PPP for Orasqualia related to the Cairo Wastewater Project in 2010, the first demerger of Orascom Telecom (OT) in 2012, the first dual listing for Orascom Construction on NASDAQ Dubai and the EGX in March 2015, and more recently in 2016 the first multi billion USD Repo by the Central Bank of Egypt representing a group of international banks, and in 2017 the first FiT Program for the Egyptian Electricity Transmission Company (EETC) to develop and finance the largest solar park in the world in Benban near Aswan comprising 30 projects for USD 2.2 billion and approximately 1600 MGW.

She handled many large M&A transactions over the years, including the mega transaction of OCI in 2008 relating to the sale of Orascom Building Materials Holding to Lafarge, for approximately USD 13 billion in addtion to USD 2 billion of assumed debt. More recently, in 2015, 2016 and 2017, she handled the sale of Citibank’s retail business to CIB, the acquisition of Pireaus Bank by ABK and the sale of Barclays Bank to AWB.