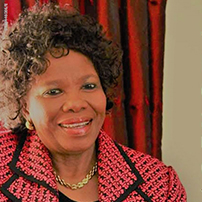 Former Director General of North West Provincial Government and currently Chairperson of GIBB Holdings Pty Ltd and South African Weather Services was trained both in South Africa and the U.S. where she studied, worked and lived for several years before returning home. Lawyer, business leader, Director of companies, she is also Chair and owner of Machipu Investments Pty Ltd, a company with interests in recycling, hospitality and financial services. Her business career span exceeds thirty years where she served as a senior executive of major local and international companies. she was appointed board member of Transnet, the Industrial Development Corp and Reebok International and others as far back as 1995.
In 1999, she had the honor of being appointed by President Mandela as a trustee of the Nelson Mandela Children’s Fund and later as Deputy Chair of the Mandela Children’s Hospital. Her most recent appointments were Chairman of South African National Biodiversity Institute (SANBI); National Gambling Board; Limpopo Tourism Board; MX Health and the International Womens Forum. Amongst other accolades, in 2012, she received “A Woman Who Makes a Difference” in the World award by the U.S.-based International Women’s Forum (IWF).She is a long serving member of the Board of Governors at Rhodes University and a founder member of the Businesswomen of South Africa (BWA) Her accomplishments and work have been profiled in a variety of publications and electronic media. She is on an active schedule of lectures and speeches at local and international conferences and Institutions of Higher Learning.