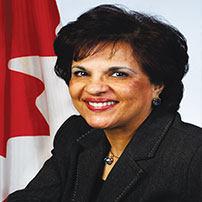 Senator Mobina Jaffer represents the province of British Columbia in the Senate of Canada. Appointed to the Senate on June 13, 2001, she is the first Muslim senator, the first African-born senator, and the first senator of South Asian descent. Senator Jaffer is Deputy-Chair of the Standing Senate Committee on National Security and Defence and sits as a member of the Legal and Constitutional Affairs, National Finance, and Internal Economy, Budgets and Administration committees. Senator Jaffer also chaired the Standing Senate Committee on Human Rights for 8 years.
Senator Jaffer served as Canada’s Special Envoy for Peace in Sudan from 2002 to 2006. From 2002 to 2005, she chaired the Canadian Committee on Women, Peace, and Security. Senator Jaffer is often invited to speak at international conferences on security issues and the United Nations Security Council Resolution 1325, which “urges all actors to increase the participation of women and incorporate gender perspectives in all United Nations peace and security efforts” and “calls on all parties to conflict to take special measures to protect women and girls from gender-based violence, particularly rape and other forms of sexual abuse, in situations of armed conflict.” As a grandmother, women’s rights and children’s rights are central to Senator Jaffer’s advocacy.