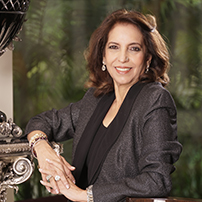 Minu Bakshi is a multifaceted and versatile individual. A singer with years of Hindustani classical musical training, a professor of Spanish language at the prestigious Jawaharlal Nehru University, New Delhi, an accredited Spanish language interpreter for the Indian Government and a Vice Chairperson of the NGO Savera (a society for the uplifting of underprivileged women and children) & the Chairperson of the UK Asian Film Festival, London. These are some of the activities for which Minu Bakshi is known and recognized.

Minu did her schooling from St. Thomas School, Delhi and then B. Sc. from Miranda House, Delhi University at which point she realized her real love lay in languages at which she was naturally gifted. So began her journey in the world of Spanish language and she studied it for six years completing her M. A and M. Phil from Jawaharlal Nehru University later proceeding to Spain to further enhance her knowledge in the language at the ‘Universidad Complutense de Madrid’. Her expertise is in the art of interpretation and she has been working as an interpreter for the President and the Prime Minister of India at various occasions for twenty or more years. She has been teaching at the JNU for almost 40 years. Recently, she was conferred the “Order of Isabella la Catolica” by the Spanish Government for her services towards promotion of Spain and its culture. This is the 2nd Highest Order given to a foreigner by the King of Spain.

That she was gifted with an aureate voice was recognized when Minu was just a youngster. However it was a concert by Begum Akhtar which was one of the defining moments of her life. She knew then that if there was anything she wanted, it was to sing . She became one of Begum Akhtars most talented and devoted acolytes. Following her assiduously from concert to concert Minu imbibed not only the fundamentals of Ghazal gayaki but also began to appreciate the nuances and beauty of Urdu and Urdu poetry. This was to have a huge impact on her later.

Based on the encouragement from her teachers Minu launched herself professionally with the launch of a ghazal album entitled “Phir Se” ….. A tribute to the poets and singers who are her inspiration. She also writes many of the lyrics of her songs herself. Her sense of passionate commitment to all her endeavors is one of Minu Bakshi’s most prominent traits.

Committed to the preservation of Punjabi culture Minu’s next and most highly successful endeavor was the Punjabi Wedding albums titled ” Lao Mehndiyan I & II”, launched by none other than Abida Parveen. This collection of traditional Punjabi folk wedding songs in a new avatar, were released by Music Today, which have proven to be best sellers and are always in demand. The former was also nominated for the Best Punjabi Album in the ETC Music awards 2006.

A compendium of Punjabi folk music consisting of 8 Cds is Minu’s most ambitious project to date. Under the Times Music banner this collection entitled “Band Baja Punjab” has become a “must have” for all lovers of Punjabi folk music world wide. For this, she was felicitated with the “Achiever’s Award 2014” by the Global Punjabi Society for her efforts to preserve Punjabi Traditional and Folk Culture by the former Prime Minister of India, Dr. Manmohan Singh.
Minu Bakshi has performed solo shows across the globe from London, Spain, Hong Kong to Washington D.C. She has also performed in prestigious fests such as the Delhi International Arts Festival (DIAF), ICCR (Chandigarh) and various charity shows organized across the country and overseas.
Her discography across various genres of music: Folk, Ghazal, Pop and Sufi shows her to be a singer of great talent and versatility.
Possibly one of the most significant milestones in her career, and a recent one at that, is the flowering of her career as an Urdu Poet.

“Tishnagi: The Thirst” was Minu’s first book of Urdu poetry. A work that garnered her unstinting praise from connoisseurs of Urdu poetry and the most hardened critics as well . Among these were eminent personalities like Farooque Shaikh the prominent actor and Tv personality who said “There’s the fragrance of honesty in Minuji’s poetry, rather than the odour of effort, which is why it engrosses you quickly and stays with you longer.”

The well known film maker Muzaffar Ali remarked at the Delhi launch of the book that “Minu Bakshi’s poetry has all the metaphors one finds in the classical Urdu ghazal, but with a striking balance between intensity and freshness almost always knocking innocently at the doors of mystic surrender.” It is no surprise that, Tishnagi was awarded for its valuable contribution to Urdu Literature by Ilmi Majlis Bihar. It also received the “Jameel Mazhari Award” by the Bihar Urdu Academy and the “Aamir Khusro Award” by the Husnara Trust Delhi.

The book “Tishnagi” was introduced to London audiences under the aegis of the prestigious Nehru Centre as well as the House of Lords. This well publicized event resulted in a record “standing room only” turnout and a slew of events all over the city including interviews with leading TV channels such as the BBC and soirees at the houses of British nobility.

“Mauj-e-Saraab”, her second book was released in November 2017 in Delhi by the veteran award-winning actor Shabana Azmi, who said: “Minu Bakshi’s poetry is ‘Felt-Thought’…her verse is steeped in love and, even more importantly, in romance – a virtue fast-disappearing in today’s world. There is a simplicity with which she surrenders to love and makes the reader yearn for more”.

“Mauj-e-Saraab” was also launched at the British Library in London, United Kingdom as well as at the Appejay Kolkata Lit Festival in January2018.

This book of Ghazals is transliterated in all 3 languages Hindi, Urdu and English with translations in English by Nyla Doud from Pakistan & has received an excellent review from the Pakistani newspaper Dawn on the 4th of February 2018.

She has recited her poetry in various important Mushairas such as Jashn-e-Bahar, Jashn-e-Bharat, Jashn-e-Rekhta, Paigham-e-Mohabbat etc in Lucknow, Patna, Delhi, Kolkata, Lahore, London and USA and so on. Recently, she was invited to the 43rd Annual Mushaira organised by the prestigious Aligarh Alumni Association, in Washington DC, where she was very well received.

Minu Bakshi was felicitated with the “Fakhr-e-Hind” (Pride of the Nation) award for her invaluable contribution to Urdu Language & Literature by the Indian Heritage Centre.

She has also been an active part of various Literary festival across Lucknow, Kolkata, Patna, Lahore and the Delhi Lit Fest.

On the occasion of the 11th International Women’s Day Celebrations she was awarded with the title of a ‘Cultural Activist’ by the Lok Sabha Member Shashi Tharoor.

One of the most exciting moments in her music career was her collaboration with the King of music Mika Singh which culminated in the release of their mega album, DJ Waleya which crossed over five million views on YouTube in just 30 days. They are now gearing up to launch their second blockbuster album.

She for the past 3 years has been the honorary Chairperson of the prestigious United Kingdom Asian Film Festival (UKAFF). Last year, she performed at a concert in London in the fond memory of the famous Pakistani singer Reshma.

Minu Bakshi is a founder member and Vice – Chairperson of “Savera” the well known NGO which works towards uplifting the economically weaker sections of society. The funds to run this NGO are generated along with other donations through various charitable concerts performed by Minu Bakshi in India and abroad.

With the fervor, passion and commitment that is so much a part of her persona, Minu continues to write, sing, teach and continue her philanthropic activities