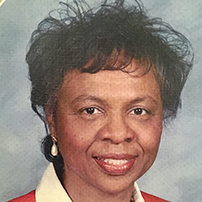 Minnie Johnson had a long career on the administrative side of academic medicine. Retired from the University of Michigan in Ann Arbor after nearly a quarter-century of service in Pediatric Medicine, Minnie helped doctors, medical students and residents meet their responsibilities to the patients they served. Prior to that, Minnie held a similar position in Pediatrics and Psychiatry at the University of Maryland, Baltimore. In addition, she held positions with the Maryland Port Administration in Baltimore, Maryland and Kraft Foods in Washington, DC.
A retiree, Minnie leads an active social, faith-based and fit lifestyle in the Ann Arbor-Ypsilanti area of Michigan, participating in a missionary group at her church, social clubs, active seniors groups, and local golf leagues where she has a leadership role. She has had the rare feat of making a hole-in-one in league play.
Minnie graduated from Washtenaw Community College (Michigan, USA) and Cortez Peters Business School (Maryland, USA), and also attended Morgan State University (Maryland, USA) and Cleary University (Michigan, USA).
As a first-time delegate-attendee to WEF Tomar, Minnie is the mother-in-law to WEF Speaker Tonya Fitzpatrick of World Footprints, and is the mother of Tonya’s husband, Ian, who is also attending the conference.