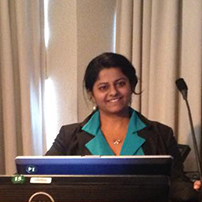 A trained human Clinical Psychologist, from SNDT University, Mumbai, Minal is trained as an Animal Assisted Therapist and mentored by renowned Animal Therapist Dr. Cynthia Chandler, from University of North Texas. She has also completed her Level I training in Play Therapy and is a licensed International Pet Partner Team Evaluator. Minal is the first person to introduce the internationally-recognized professional discipline of Animal Assisted Therapy (“AAT”) in India. Apart from being the only one in India to imparts intensive training to volunteers and professional therapists (both humans and animals), she also provides consultation to set up AAT centres in India and abroad.
Minal has successfully practiced AAT over the last 14 years and impacted the lives of more than 10,000 patients with CerebralPalsy, Autism, speech disorders, and stress induced problems such as anxiety & depression, to improve their quality of life.
Minal is also the Founder of Animal Angels Foundation, India’s first and only NGO working in the field of Human Animal Interaction. In addition to introducing and practicing AAT in leading hospitals such as Ruby, KEM, Wockhardt & CiplaCancer Center, she has also introduced this therapy in Corporates, Schools and Airports to deal with the alarmingly increasing stress levels in people today.
All programs run by Minal are exhaustively documented, forming an unprecedented empirical body of research material for the Indian audience. The documentation demonstrates that AAT compliments other therapies to provide faster results, improved patient participation in the treatment process and ensures positive state of well-being in the patient. Two of her papers have been presented at International conferences
Minal, along with her first Therapy dog Kutty, were the first registered Pet Partners from India. She has won the international awards ‘Beyond Limits 2007’ by Pet Partners, USA for exemplary work in developing AAT as a field in India. Minal is also an International Pet Partner Evaluator and offersevaluations for potential teams, who want to register are Pet Partners.
She was also awarded the Ashoka Fellowship and declared one of the top 6 women entrepreneurs in India by She The People Forum. Minal has also been a speaker at prestigious Conferences held by NIH & IAHAIO* in the USA apart from the ones in India. She is also featured in the leading newspapers, Magazines and TV shows in India & abroad,
Minal started this work when India was totally unfamiliar with the concept of animals in the therapeutic setting. The foremost challenge she faced was to change the mindset of people to accept animals as therapeutic agents. From ‘No dogs allowed in Hospitals and Schools’ to ‘We wish to start AAT program at our Hospital / School’ was a huge transformation of the Indian mindset. She has been involving the pet owning community, thought to be elite, into volunteering with their trained therapy pets to visit those with disabilities or in need. Thus making AAT accessible to those who can’t afford a dog or therapy on their own.
Leveraging her experience, Minal aims to set up Standards of practice for AAT and welfare protocol of working dogs, in association with the Animal Welfare Board of India and the Ministry of Health & Family Welfare in India