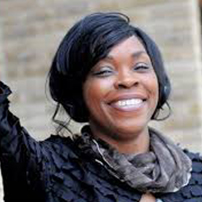 Michelle Akintoye BEM is the owner of Castle Stars Educational Day Nursery and the Founder and CEO of BRITAFRIQUE a not-for-profit organisation that supports and encourage young people in education and to become mentors to younger children, whilst providing role models for the youth to work with. She stood in the elections for councillor ship in the Chessington South ward in 2012 and won 1738 votes (12%).

She has a passion to speak on behalf of those who can’t speak up for themselves or who don’t believe anyone is listening in particular for vulnerable adult, young people, children and their families at the House of Parliament since 2013.

Michelle is a highly respected community leader, Teacher, Educator, entrepreneur and role model to youth and young people. Her contributions to the community and improving young people lives of young people was recognised in the Queen’s BirthdayHonours list 2012 and she was awarded the British Empire Medal (BEM).
For 12 years she was a Voluntary Director of Pro-Generation a Youth Club and Supplementary School in Hammersmith and Fulham.

She is the coordinator of the Hammersmith and Fulham Appropriate Adult scheme which involves liaising with young offenders. She has a proven track record of engaging with diverse range of stakeholders and building rapport with a wide variety of people. She is relied on to make tough decisions that take account of different priorities and perspectives of a diverse range of stakeholders. She has a thorough understanding of governance processes and procedures which have been demonstrated in her various roles.