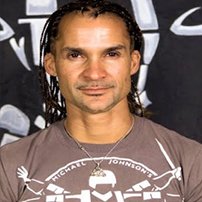 Michael C Johnson is CEO at Shockwave Defense.The Johnson defense lineage started back in the 1920’s with Johnson’s grandfather Samuel K. Johnson who’s red belt in Judo, and black belt in Jiu Jitsu began a passion that lasted for over 3 generations. Johnson started his martial arts backgraound at the age of 2 under the watchful eye of his dad steve Johnson (original student of Bruce Lee). Johnson has since created a defense system that has been sought after and utilized by individuals in the Secret service, hostage rescue, Marines, Army Rangers, threat analyst, Law enforcement and security world wide. Johnson has trained the biggest law enforcement agency in the state of Florida, and has reached over 18,000 officers combined with his dynamic system. Corrections, probations, and law enforcement officer alike have applauded his simplicity and effectiveness in combining and enhancing their current programs. Whether training individuals or working with special teams for larger agencies, Johnson’s passion to keep those in harms way safe has become his trademark and a pivotal part in the evolutio of what he calls Bellicusology.
Bellicusology was never intended to be an end all, but rather conceptual bridge to gap the transitions of hand to han, stick, knife, and gun. Johnson has operated as a defense instructor for the past 20 years, starting back in 1994 in his families defense business. Since that time he has consulted individuals and agencies specializes in, mental toughness and training tactics to help individuals survive deadly force encounters.
Another unique trait in how Johnson has tested his approach. To test and demonstrate the skills and concepts taught and their validity, he fights regularly in what is know as Dog Brothers Martial Arts Gatherings & Combat Initiatives. These events are full contact arenas with no judges, no referees, and are no-regulated. Fencing mask, gloves, and sticks are the only protection against the intense realistic non-sanctioned fights that include elbowns, head butts, kicks, kness, and sticks, and other common utilities used as weapons. The contenders fight until completion, or 2 minutes , which ever comes first.