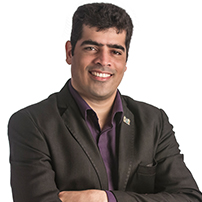 Vice President of the Republic of Suriname

Michael Ashwin Satyandre Adhin is currently the Vice President of the Republic of Suriname, which is located in the north-eastern coast of South America. Adhin has held this office since August 2015 and is the youngest individual (age 35) in the history of Suriname to do so.

As Vice President he chairs the Council of Ministers, and also leads additional sub-councils and champions several areas such as: the Health in All Policies Initiative, the National Planning and the Roadmap to an Excellent Government.

Prior to his Vice Presidency, Adhin served as Minister of Education, Science and Culture, and was a lecturer at the Anton de Kom University of Suriname.

Adhin is bearer of the highest national award, the Order of the Yellow Star, for his contributions made to the Surinamese community in general and those of Indian Origin in particular. He is a strong advocator of cultural preservation, nation-building, patriotism and celebrating cultural diversity as a binding mechanism towards one Surinamese identity. Adhin has pursued studies in Suriname and the Netherlands and has a Master’s degree in Electrical Engineering and Telecommunications.