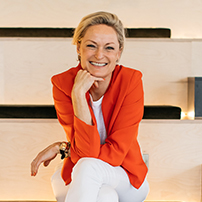 Mi started her career in film and TV over 25 years ago in Stockholm, Sweden after completing studies at Stockholm Film School, New York Film Academy and New York University. She now lives in England.

After many years of freelancing in high-end film and TV, working on everything from Kellogg’s commercials to Bond films and other Hollywood blockbusters, she set up The Vlog Academy.
Mi now teaches thousands of people to grow their online presence, get more confident in front of the camera and to connect on a deeper level with a larger audience.
She has created Eye Storm to give women around the world more confidence and a stronger voice.