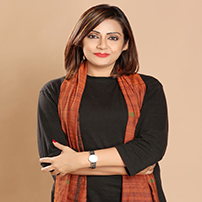 Meghna who is also known as Mehzabin is a pioneer in the fashion industry who started her career into the world of Fashion as Meghna Rita way back in the 90s.
She started her journey when Fashion industry was at an infant stage in the North East.
She has been doing Fashion shows Promoting the assam silk all over India and some other countries like Thailand , UAE, Bangladesh and few more She has worked with many national and international models, She has to her credit of dressing former Miss World & Actress Aishwarya Rai Bachchan , Bipasha basu,Milind Soman, Pooja bedi,Sonal Chauhan, celina jetty,nia sharma, nayanika chetargee and many more.
She has also designed for few corporate houses like IOC(indane), greenwood resort, hotel lily, GNRC pharmacy. Meghna has been working n doing her bit in trying to bring and promote the pat silk and muga silks to mainstream fashion senario for many years now and she is successful in doing her bit and people have loved it She was the official designer for the VVIP volunteers in the 33rd NATIONAL GAMES, 2007. Meghna’s the design studio presented a show AUTUMN NOTES, Fall 2017 on 23rd August 2017 at Vivanta by Taj, guwahati where an auction of a garment was done to support the cause of cancer treatment initiated by a Ngo, Morning club, where ₹50000 was generated for one garment which was donated to the Ngo. Nia sharma who is a renowned Actress from mumbai and also the second sexiest woman in asia has walked the ramp for Meghna’s in a pure Muga mekhela chador with guna work in a kingkhap design in 2018. MEGHNA’S is a brand name that is always related to fashion in the North East and none can miss that.