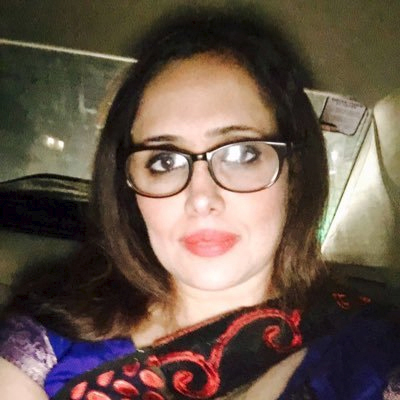 Mehr Tarar, the woman whose name is at the heart of the Tharoor storm, is a Pakistani journalist.

A graduate of West Virginia University, the 45-year-old Lahore-based journalist is mother of a 13 year old boy. She is reported to be separated from her husband, a rich businessman based out of Bahrain. She used to work with a Pakistani daily, but quit recently. It’s reported that she now works with the group’s business channel. Another Lahore-based journo, who has worked with Mehr, describes her as “competitive”.

Did she know Shashi Tharoor? Well, in an interview to an Indian media publication, she said, “I met him in April last year for an interview in India. Then I met him in June in Dubai at a social gathering. Yes, I have been in touch with him once in a while on Twitter and email.”

Tarar had come to New Delhi in December last year to interview Jammu and Kashmir chief minister Omar Abdullah. He told Hindustan Times that he agreed to the interview because there was a request from Tharoor’s office. However, on her December visit, she didn’t get to meet Tharoor who was in his constituency in Kerala.

Mehr has also told a publication that she kept in touch with the minister because she wanted to write a book on Kerala. “I used to send him my articles and he used to send me his comments, etc. But that was all,” she said.

Another Indian media website reports that in her Pakistan newspaper column, My Corner, dated October 20, 2013, she wrote: “Whether they read my tweets or not is immaterial to the secret glee that at any given time I can gush over Amitabh Bachchan’s latest movie, swoon over Channing Tatum’s eyes, eulogise Nicholas Kristof’s wisdom, retweet Imran Khan’s wishes for Pakistan, smile reading Ronan Farrow’s inimitable wry humour (his movie star looks are just an added bonus), be moved by Christiane Amanpour’s heartfelt words on Syrian refugees, awww at SRK’s love for life, or praise Shashi Tharoor for his very cool words (man, his voice is mesmerizing!).”

Interestingly, in the same column, she also hinted at the presence of a “special person” in her life without naming him: “…here’s to that special one (you know who you are!) who makes Twitter an experience to cherish…forever. Thank you…,” reports the website.

Tarar was quite upset with the whole Twitter face-off, but what hurt her most was Pushkar calling her an “ISI agent”. On Thursday, Mehr told Hindustan Times, “Please tell Sunanda she can call me anything but not an ISI agent. My son is very upset.”