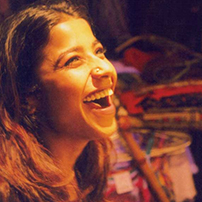 Meghna Khanna is the daughter of a fighter pilot father and a teacher-writer mother. She grew up in remote Air bases across the
northern part of the country, changing schools and homes all through her childhood.

Finishing off her graduation and post graduation in Pune, she earned her MBA from Symbiosis. She spent a short stint in Mumbai working in qualitative market research .

She had just turned 24 when she decided to walk away from it all to move to Bangalore and start her own small shop called Levitate, more than 16 years ago. She believed in finding a gap in what was on offer and following a simple acronym in order to achieve success. She pursued the theory of
creating a Sustainable Differential Advantage( namely S.D.A). That is how she has made her brand Levitate synonymous with all things Indian— craft and design—
making them edgier and more contemporary for the modern Indian and the intrepid traveller.

She is an avid classic motorcyclist, always on the lookout for exploring and travelling. She participated in the first ever Himalayan Odyssey in 2005, where she rode a Royal Enfield through the highest motorable pass in the Himalayas and into the Limca Book of Records where she was highlighted as the first Indian woman motorcyclist to ride in the Himalayas . The Enfield coffee table book, titled Royal Enfield, the Legend lives on , carries a feature on her and she also appeared in advertisements for her favorite motorbike.

Today she has an 8 year old son and a 4 year old daughter ! She encourages them to enjoy travel as well, giving them authentic
experiences, spending time in the outdoors and camping with them at their quaint farm getaway, outside Bangalore.

She counts herself lucky that she has always had the support and care of her husband and his parents to follow her endeavours. That she can grow and nurture her support staff, helps her work harder to keep her niche business going. Many a times, she has faced harrowing odds and has even contemplated giving it all up, but then she has driven to resurrect herself and has ‘Levitateʼd.