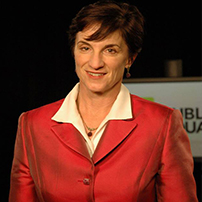 Megan Kamerick is passionate about getting women’s voices into media. A journalist for more than 20 years, she is the former president of the Journalism & Women Symposium, and she is currently the host of Morning Edition on KUNM. Previously she was the producer of New Mexico in Focus, a weekly public affairs show on KNME/New Mexico PBS, as well as Public Square, another KNME show funded by the W.K. Kellogg Foundation. She is also an independent radio producer and freelance writer. Megan worked at business weeklies in San Antonio, New Orleans and at the New Mexico Business Weekly. She has also freelanced for many publications and produced stories for LatinoUSA, Marketplace and National Public Radio. Megan’s TEDx Albuquerque talk on women and media was the first TEDxABQ talk to go national on TED.com. She did a followup talk at the inaugural TEDxABQ Women event in 2012.